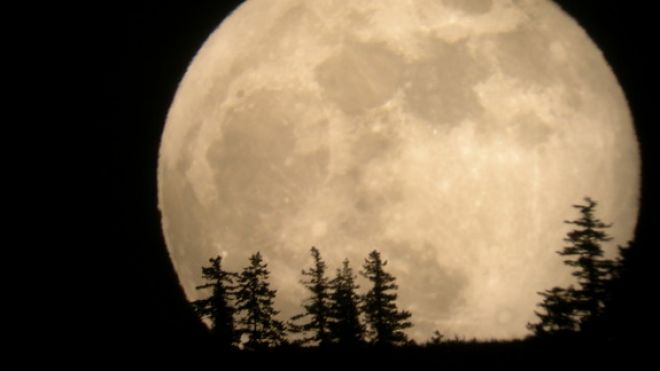 The largest full moon of 2013, a so-called “supermoon,” will light up the night sky this weekend, but there’s more to this lunar delight than meets the eye.

On Sunday, June 23, at 7 a.m. EDT (1100 GMT), the moon will arrive at perigee — the point in its orbit its orbit bringing it closest to Earth), a distance of 221,824 miles. Now the moon typically reaches perigee once each month (and on some occasions twice), with their respective distances to Earth varying by 3 percent.

But Sunday’s lunar perigee will be the moon’s closest to Earth of 2013. And 32 minutes later, the moon will officially turn full. The close timing of the moon’s perigee and its full phase are what will bring about the biggest full moon of the year, a celestial event popularly defined by some as a “supermoon

You can watch a free webcast

While the exact time of the full moon theoretically lasts just a moment, that moment is imperceptible to casual observers. The moon will appear full a couple of days before and after the actual full moo most will speak of seeing the nearly full moon as “full”: the shaded strip is so narrow, and changing in apparent width so slowly, that it is hard for the naked eye to tell in a casual glance whether it’s present or on which side it is.

During Sunday’s supermoon, the moon will appear about 12.2 percent larger than it will look on Jan. 16, 2014, when it will be farthest from the Earth during its apogee.

Supermoon’s big tides
In addition, the near coincidence of Sunday’s full moon with perigee will result in a dramatically large range of high and low ocean tides. The highest tides will not, however, coincide with the perigee moon but will actually lag by up to a couple of days depending on the specific coastal location. [The Moon Revealed: 10 Surprising Facts

Any coastal storm at sea around this time will almost certainly aggravate coastal flooding problems. Such an extreme tide is known as a perigean spring tide, the word spring being derived from the German springen, meaningto “spring up,” and is not — as is often mistaken — a reference to the spring season.

Spring tides occur when the moon is either at full or new phase. At these times the moon and sun form a line with the Earth, so their tidal effects add together (the sun exerts a little less than half the tidal force of the moon.) “Neap tides,” on the other hand, occur when the moon

is at first and last quarter and works at cross-purposes with the sun. At these times tides are week.

Tidal force varies as the inverse cube of an object’s distance. We have already noted that this month the moon is 12.2 percent closer at perigee than at apogee. Therefore it will exert 42 percent more tidal force at this full moon compared to the spring tides for the full moon that will coincide with apogee next January.

Huge moon at moonrise
Usually the variation of the moon’s distance is not readily apparent to observers viewing the moon directly.

When the perigee moon lies close to the horizon it can appear absolutely enormous. That is when the famous “moon illusion

” combines with reality to produce a truly stunning view. For reasons not fully understood by astronomers or psychologists, a low-hanging moon looks incredibly large when hovering near to trees, buildings and other foreground objects. The fact that the moon will be much closer than usual this weekend will only serve to amplify this strange effect.

So a perigee moon, either rising in the east at sunset or dropping down in the west at sunrise might seem to make the moon appear so close that it almost appears that you could touch it. You can check out this out for yourself by first noting the times for moonrise and moonset for your area by going to this website of moonrise times by the U.S. Navy Oceanography Portal