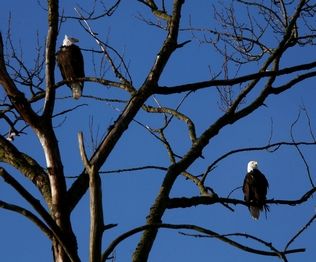 Dan Bates / The Herald
A bald eagle prepares to leave its perch on Smith Island near I-5 and the Snohomish River in January.

Others consider it a threat to their livelihood.

The project is a massive undertaking to breach an old 1930s dike along Union Slough north of Everett and build new dikes farther from the water. By flooding more than 300 acres, the county hopes to bring back some of the salmon habitat converted to farmland after settlers arrived here in the 1800s.

By sheer size, the Smith Island proposal is the second largest estuary-restoration project in the region after the 750-acre Nisqually National Wildlife Refuge in the south Puget Sound.

It will come at a price: $18 million, most of it from grants. The total includes $2 million from the city of Everett.

That’s an awful lot to pay, some argue, for a project estimated to restore 900 or so spawning adult chinook per year to the Snohomish River and its tributaries.

There’s more to the cost than what the county will pay. A neighboring lumber mill and tree farm worry that resulting changes to the estuary could put them out of business. At a minimum, they want to see the county conduct more thorough studies.

There’s also a vocal contingent of farmers dead-set against what they view as needless destruction of what is now agricultural land. State law, they correctly point out, requires the county to protect farmland, even as federal law often spells out conflicting steps to protect salmon.

You can expect to hear more about Smith Island in the coming months — and beyond. After years of study, the county on June 10 issued a final environmental impact statement. That’s a precursor to seeking permits.

Balancing the competing needs of farmers and fish is one of the trickiest feats governments in Western Washington are asked to perform. It’s why Snohomish County convened the nonpartisan Sustainable Lands Strategy three years ago to seek equilibrium.

In Snohomish County government, it’s easy to find leaders on both sides of the fish-farmer teeter-totter.

Somers, who worked as a fisheries biologist for the Tulalip tribes before joining the County Council, said there’s solid science behind the Smith Island project and its benefits for salmon.

The county arrived at this point after more than a decade of study, he said. Nobody was forced from the land.

“We bought the land from a willing seller,” he said. “We have not condemned any land.”

Councilman John Koster, a former dairy farmer, is staunchly opposed because once saltwater floods the ground, it will become unfarmable.

“The bottom line for me is it’s taking out in excess of 300 acres of farm ground when we have people looking to farm and (it flies) in the face of our mandate to conserve farm ground,” he said.

While opposed to the project, Koster can’t see any way for the county to back out. To sell the land, the county would have to repay grants used for the purchase years ago.

“This is a freight train running down the track and I don’t know that it’s even possible to stop it,” Koster said.

The fate of the Smith Island project, from here on, won’t necessarily rest with the County Council.

The county must submit a shoreline development permit, among others, before breaching dikes or any construction. That permit can be appealed after it’s issued, likely late this year. The appeal would go to a state hearings board.

Smith Island sits between Union Slough to the east and the main stem of the Snohomish River to the west.

The county project involves the part of the island east of I-5 and north of Everett’s sewage treatment plant.

Buse Timber, on the west side of I-5, is one of the businesses that could be affected. Originally founded in 1946, Buse has about 70 workers and is now employee-owned.

“We’re not opposed to the project, we just need some assurance,” said Mark Hecker, Buse’s recently retired president and a former commissioner with the local diking district.

The company has two concerns: being protected from floodwaters and being able to use Union Slough to float logs to the mill.

“We’ve never had any flooding as long as those dikes have been there,” Hecker said. “So they’re pretty strong.”

Buse wants the county to make commitments about dredging the slough if the new dike system causes it to silt up.

“That channel is pretty critical for us,” Hecker said. “If that were shut off, it would seriously impact whether we could run or not.”

Another nearby business facing potential effects is Hima Nursery, an 80-acre organic farm on the east side of I-5. Owner Naeem Iqbal worries that tampering with the dikes would prevent his land from draining properly and allow saltwater to seep in, potentially wiping out his nursery.

On Friday, Diking District 5, which is comprised of local landowners, voted to appeal the county’s final environmental impact statement. They’re asking the county for further examination the issues business owners have raised.

“Negotiations with the county have been going on for two and a half years and some of those issues aren’t resolved yet,” attorney Peter Ojala said.

If not for the fish-habitat plans on Smith Island, some farmers would like to grow crops there.

As Goehrs sees it, the county is looking to spend millions to destroy ag land. If farmed, that same land could provide jobs for dozens of agricultural workers.

The Smith Island project was spawned by the 1999 Endangered Species Act listing of the chinook salmon.

To address the problem, the federal government in 2007 adopted an overall Puget Sound recovery plan, part of which addresses the Snohomish River basin.

The Smith Island property, by 2001, already had been identified the best of a dozen places in Snohomish County for re-creating salmon habitat, according to a report from the county’s Public Works Department. The other sites would have carried similar costs for realigning dikes.

Federal studies have identified two distinct populations of naturally spawning chinook salmon in the Snohomish estuary: Skykomish chinook and Snoqualmie chinook. Several environmental factors, including habitat loss, have driven those populations to about 3 to 6 percent of historical levels, respectively.

The Puget Sound Partnership, which consists of government agencies, businesses and the public, said the spot near the mouth of the Snohomish River has importance beyond those two groups of salmon.

“This project potentially benefits all 22 populations of chinook in Puget Sound, including Nisqually fish leaving Puget Sound that may use the Snohomish estuary as well,” spokeswoman Alicia Lawver said.

If completed, the Smith Island project would satisfy about a quarter of the goals for restoring salmon habitat in the Snohomish River basin.