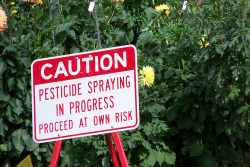 jetsandzeppelins
If only bees could read.

Even as Oregonians are mourning and memorializing the tens of thousands of bees killed in a recent pesticide spraying, they’re also trying to prevent other bees from meeting a similarly tragic end. That means keeping the pollinators away from the poisoned trees that caused the deaths. And for some activists, it also means pushing for new rules and policies to curb use of neonicotinoid insecticides.

The tragedy started a week and a half ago when a landscaping company sprayed Safari neonic insecticide over 55 blooming trees around a Target parking lot in Wilsonville, Ore. Soon thereafter bees started dropping dead. The number of bees killed in the incident has risen to more than 50,000, making it the biggest known bumblebee die-off in American history. The insecticide was reportedly sprayed in an attempt to kill aphids.

To stop the slaughter, nets have been draped over the insecticide-drenched linden trees to prevent pollinators from reaching their flowers. The time and equipment needed for the draping were donated by five cities, three landscaping companies, and volunteers, according to the Xerces Society, a nonprofit that works to conserve insects and has been helping to coordinate the effort.

Xerces Executive Director Scott Black told Grist that the Wilsonville die-off, and a similar but less dramatic Safari-induced die-off in a linden tree in Hillsboro, Ore., represent the “tip” of a pollinator-killing iceberg.

“These insecticides are used throughout the country in both urban and agricultural environments,” Black said. “If these events had not happened over areas of concrete, I am not sure anyone would have ever noticed. The insects would just fall into the grass to be eaten by birds as well as ants and other insects.”

Black said his group will send letters to local and state agriculture departments across the country, urging them to end the use of neonicotinoid insecticides on trees, lawns, and for other cosmetic purposes on lands that they manage. He said such a policy is in place is Ontario.

(Separately, beekeepers and activists are suing the federal government in an effort to ban the use of neonicotinoids in America. The pesticides are deadly to pollinators and their use is being banned in Europe.)

Xerces also wants warning labels mandated in aisles of stores where insecticides are sold to help consumers understand their hazards.