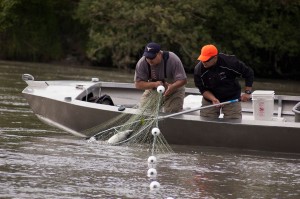 Nooksack River early chinook are part of a major population group that must be recovering before the Puget Sound chinook listed as “threatened” under the Endangered Species Act (ESA) can be delisted.

“We’re trying to conserve all the natural origin fish by using a smaller mesh net,” said Alan Chapman, ESA coordinator for the tribe. “The fish tangle by the snout, rather than the gills or body, so they can be safely released.”

Fish from the state Department of Fish and Wildlife’s North Fork Nooksack early chinook hatchery program are marked with a clipped adipose fin and/or coded-wire tag. When a tangle net is used, tribal fishermen can harvest those fish, while releasing the wild ones.

The Lummi Nation contracted with tribal fishermen Rab Washington and Johnny Olsen to fish the small mesh net, with the assistance of natural resources staff who sort the fish, take tissue and scale samples from natural origin fish before releasing them, and take scale samples and coded-wire tag information from the retained hatchery salmon.

“We hope this pilot program will lead to a closely supervised tribal fishery so we can get back to the days our elder fishers reminisce about,” said Merle Jefferson, director of Lummi Natural Resources. “Eventually, we could use the tangle net to harvest pink salmon that haven’t been available to tribal fishermen because of chinook bycatch concerns. This will also increase fishing opportunities during the spring and summer months, and help protect the fall chinook fishery from bycatch concerns.”

The decline in salmon runs has come at a great cost to Lummi fishermen, who make up one of the largest tribal fishing fleets in the country. Increasing fishing opportunities is crucial to supporting their Schelangen, or way of life, and retaining their tribal identity.

“We need to get our kids out fishing so they can understand the way it used to be and why we do what we do,” said Randy Kinley, fisherman and Lummi policy representative. “Future leaders need to remember where we came from, as it was taught to us.”

The tangle net fishery helped the tribe get one step closer to that goal by providing all of the salmon served at the Lummi Nation’s First Salmon Ceremony in May.

“Everyone in our community had an opportunity to feast on the salmon and celebrate our culture and connection to our fishing heritage at our First Salmon Ceremony,” Jefferson said.