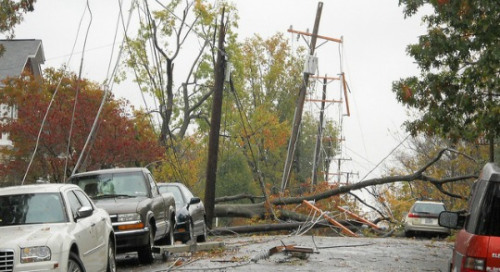 The nation’s energy infrastructure is a sitting duck in the face of climate change.

This is according to a report released Thursday from the Department of Energy that looks at how the effects of climate change–from increasing temperatures, decreased water supplies and rising sea levels–threaten the nation’s energy network.

In the summer of 2010, for example, two nuclear power plants–Hope Creek in New Jersey and Exelon’s Limerick Generating Station in Pennsylvania–had to reduce power when the cooling waters from rivers was too high.  Or take July 2011 when an Exxon pipeline beneath the Yellowstone River was ravaged by flood debris, spewing oil into the river.

Rather than steering away from water-intensive and water-polluting energy extraction techniques like fracking, the report states that “attendant water demands for their development and production become increasingly important.”

“Water is obviously the big question,” the Associated Press quotes Jonathan Pershing, deputy assistant secretary of energy for climate change policy and technology, who oversaw the report, as saying. “In drought you don’t have enough water. As seas rise, you have too much.”

A press release on the report lists more of the upcoming challenges:

“We don’t have a robust energy system, and the costs are significant,” the New York Times quotes Pershing as saying. “The cost today is measured in the billions. Over the coming decades, it will be in the trillions. You can’t just put your head in the sand anymore.”

The American Society of Civil Engineers also recently flagged the nation’s energy grid and distribution system as being in need of serious investment, giving it a grade of D+ in its 2013 Report Card for America’s Infrastructure.