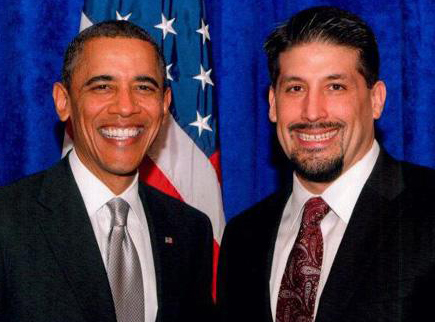 Rion Joaquin Ramirez, left, was named by President Barack Obama to the President’s Commission on White House Fellowships on July 12.

Rion Joaquin Ramirez is general counsel for the Suquamish Tribe’s Port Madison Enterprises, which has expanded the tribe’s economic diversity and made it one of the largest employers in Kitsap County, west of Seattle.

Ramirez is soon to take on another significant responsibility: Helping select men and women who work for a year as full-time, paid assistant to senior White House staff, the vice president, Cabinet secretaries and other top-ranking government officials.

Ramirez, Pascua Yaqui/Turtle Mountain Chippewa, was named by President Obama to the President’s Commission on White House Fellowships July 12. He was not available for comment; technically, the president has only announced his intent to appoint Ramirez to the commission, so Ramirez can’t speak to the media until the appointment is official, which should be within two weeks, according to the White House Communications Office.

Ramirez is the second presidential appointee associated with the Suquamish Tribe this year. In May, Obama appointed Suquamish Tribe Chairman Leonard Forsman to the Advisory Council on Historic Preservation.

The president appoints members of hundreds of federal agencies and commissions, but each has considerable influence over its area of focus. For example, the Advisory Council on Historic Preservation manages the federal historic preservation review process and promotes historic preservation as a means of promoting job creation, economic recovery, energy independence, sustainability, and resource stewardship. In March, it endorsed the United Nations Declaration on the Rights of Indigenous Peoples, saying it was “an opportunity to promote better stewardship and protection of Native American historic properties and sacred sites and in doing so … ensure the survival of indigenous cultures.”

Speaking as chairman of the Suquamish Tribe, Forsman said Ramirez has helped formulate Indian policy on the federal level and helped develop the legal infrastructure needed for tribes to expand their economies. “He’s been a part of our growth for quite a long time,” Forsman said. “He’s interested in the community, in the social aspects of the tribe, and he’s very familiar with families here and from other tribes.”

Ramirez is the son of Larry Ramirez, an American Indian Athletic Hall of Fame inductee who pitched for Cal State Northridge’s 1970 NCAA Division II national championship team and was the first Native American to pitch a winning complete game in the College World Series.

He is a past president of the Northwest Indian Bar Association and a former appellate court justice for the Turtle Mountain Band of Chippewa Indians, where he is enrolled.

In 2012, Ramirez was a member of the Obama for America National Finance Committee and co-chairman of the Obama Native Outreach Group. He raised between $200,000 and $500,000 for Obama’s reelection campaign.

President Lyndon B. Johnson established the White House Fellows Program in October 1964, declaring that “a genuinely free society cannot be a spectator society.” His intent was to draw individuals of exceptionally high promise to Washington for one year of personal involvement in the process of government “and to increase their sense of participation in national affairs.” Fellows are expected to employ post-fellowship what they learned by “continuing to work as private citizens on their public agendas.”

Johnson hoped Fellows would contribute to the nation as future leaders. Indeed, most if not all have: Past Fellows include Tom Johnson, who later became publisher of the Los Angeles Times and chairman of CNN; Robert C. McFarlane, who served as national security adviser to President Ronald Reagan; Colin Powell, who became an Army general, chairman of the Joint Chiefs of Staff, and U.S. Secretary of State; Timothy E. Wirth, who became U.S. senator from Colorado and an Under Secretary of State; and numerous authors, elected officials, journalists, military leaders, and assistant Cabinet secretaries.

According to the commission website, commissioners met in Washington, D.C. the first week of June and interviewed 30 White House Fellowship finalists. Commissioners will recommend 11-19 for appointment; fellows are paid at GS level 14, step 3 – currently $90,343 – and benefits, and cannot receive any other compensation during their Fellowship.