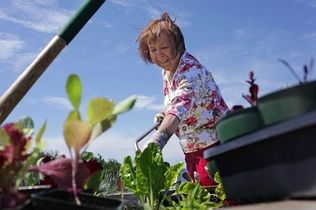 Mark Mulligan / The Herald
Sandy Swanson, a licensed practical nurse at the Tulalip Health Clinic, waters plants in the new garden outside of the clinic on June 16. Swanson works in the elder care program, and when she gets a chance will duck outside to work in the garden. “It makes me smile to come out here and care for these plants,” said Swanson.

TULALIP — When a doctor at the Tulalip tribal health clinic advises a patient to eat healthier food, it doesn’t have to be only words that are heard or written down on paper.

The doctor can take the patient right outside the building and show them that they can grow that food for themselves.

A small, rudimentary vegetable garden at the Tulalip Karen I. Fryberg Health Clinic was greatly expanded this year with several new raised wooden beds. Leeks, kale, squash, cucumbers, peas, tomatoes and more are thriving in their southwestern exposure to the summer sun over Tulalip Bay.

Culinary and medicinal herbs and plants are being grown as well — parsley, tarragon, basil, lavender and rose hips, to name a few.

“It’s about engaging with our patients,” said Bryan Cooper, clinical lead at the health center. “Instead of telling them what to do, it’s ‘Let’s work together.'”

The incidence of diabetes on the reservation is high, and the garden is especially geared toward helping diabetics manage their condition through their diet.

Doctors and staff members from the lab and pharmacy have been accompanying patients to the garden to discuss the possibilities, said Roni Leahy, diabetes coordinator at the clinic.

Planting soil, tubs, gardening materials and advice have been dispensed on special-event days at the clinic, such as a recent “Diabetes Day.”

The garden is an extension of a program established two years ago with the opening of the Hibulb Cultural Center and Natural History Preserve a few miles away, Cooper said.

In one program there, young people have been taught traditional ways of harvesting and processing native medicinal plants. In another, titled “Gardening Together as Families,” a popular community vegetable garden was established.

At the clinic, the idea was to build on the success of the Hibulb programs and create a direct link between the medical facility and healthy diets, staff members said.

The late Hank Gobin, the tribes’ cultural director who helped establish the Hibulb programs, was motivated to improve tribal members’ diets in part because he himself was a diabetic. He passed away in April at age 71.

“It’s always about people and their health and well-being,” Leahy said. “That’s how we keep his memory alive.”

The clinic garden has been maintained by staff members and volunteers. At the end of the season, the food will be used at tribal events, Leahy said.

“Then I come out here and play,” she said, as she dug in one of the planters.

The plan is to expand the garden next year to a nearby slope facing the bay, with terraces and a trail, Cooper said.

“We want to start these (gardens) and get them to a place where the community takes over,” Cooper said.

A health fair and blood drive is scheduled for 9 a.m. to 3 p.m. Friday at the Tulalip Karen I. Fryberg Health Clinic, 7520 Totem Beach Road.