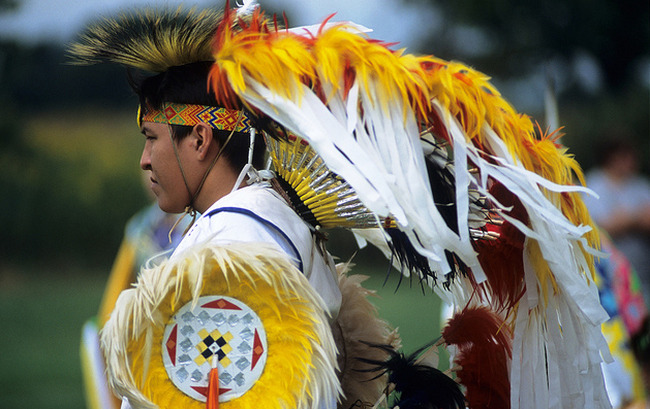 As a mixed-race indigenous woman, I’ve had to dispel quite a few myths about what it means to be Native American in this day and age. Many of these myths are used to either insult me, my community, and my family, whether knowingly or unknowingly; or exoticize me (really, I am not amused when you say I look like Pocahontas). My mother has been asked if she was an American citizen — because apparently you cannot be part of a tribe and a U.S. citizen simultaneously? — and has even been told that there are no “full-blooded” or even “half” native people left in the United States, despite the fact my mother was proof that very statement was false. Many young natives I know have also been made uncomfortable over incessant questions regarding everything from sweat lodges to scalping, headdresses, peyote, and why so many natives have “Mexican” last names (answer: missionaries).

I know that there’s a great deal of misinformation about indigenous American culture, that often leads to a number of assumptions. Indigenous people, I promise, are not like what you see on television or in the movies. While there are a number of extremely detrimental stereotypes surrounding indigenous people in the U.S. (see also:The Lone Ranger), here are the three I have encountered most often.

Myth: American Indians get college, medical care, and everything for free.

Reality: This is at the top of the list because there are so many things incredibly wrong with the above statement. I usually hear this coupled with statements about how I have it so much better than middle-class white kids because I was born brown, but this is incredibly untrue. The only native people in the U.S. who really benefit from any sort of educational or medical aid (at least at the federal level, because there are state-level programs that help impoverished indigenous communities) are federally recognized, meaning they are an acknowledged tribe by the U.S. government and have a government-to-government relationship. Tribes that are not recognized federally — despite the existence of treaties entered into by the government and tribal leaders — do not benefit from many of these social programs. Federal recognition is “earned” by meeting several standards which prove continued existence as a tribe and continued governance over the collective group. However, with a history of violence, forced assimilation, Indian boarding schools, and racial injustice, many tribes cannot meet such standards.

This isn’t just about social programs, though — that’s just the tip of the iceberg. It’s about the fact that people are being told outright that their community has either never existed in the first place, or that if they did, they are now extinct. As someone who is part of a tribe unrecognized by the federal government , there is nothing more discouraging then looking through pages and pages of financial aid for American Indian students and seeing that you do not qualify for any solely because the U.S. government has continually failed to honor the people it displaced. But then again, I guess we can only expect as much from a country founded on the systematic destruction of an entire people.

Myth: All indigenous people practice the same religion, have the same culture, and speak the same language.

Reality: Most Americans seem only to be familiar with Southwestern indigenous culture and fail to recognize the diversity that exists within native communities. My family’s roots are in the Pacific Northwest, so our traditional diet consisted of fish, berries, and other vegetation. We were a whaling community, our clothes look quite different because of the natural shift in climate and geography, we did not wear the headdresses or war bonnets that people so often associate with indigenous people, and we did not live in teepees or hunt bison. Our music is deeper in tone, and our dances our different. The culture of the Southwest is beautiful, but it just isn’t mine — modern Seattle is different from Little Rock, so what makes you think they would have been the same 300 years ago?

Myth: Indigenous people were historically peaceful and tribes tended to get along.

Reality: Um…no. People are people, and tribal governments are still governments. There was still war, there was still bloodshed, and there was and remains a great deal of animosity between certain tribal groups.When we buy into these stereotypes and misconceptions, we actually fail to recognize the complexity of intertribal relationships. I’m not sure why people seem to think that indigenous people lived in an alternative universe of hippie-free-love, nonviolence, and socialism, but I’ve rolled my eyes so many times at this caricature, that I’m pretty sure they’re stuck in the back of my skull.

It’s important to recognize and dispel these myths because their continuation only creates a static image of a community that is anything but uniform. The indigenous community within the U.S. is incredibly complex, with its own political structure in relation to the federal and state governments, as well as varied culturally. Recognizing the intricacies of an oftentimes ignored community is important to support and appreciate all that indigenous people can and do offer to their country.