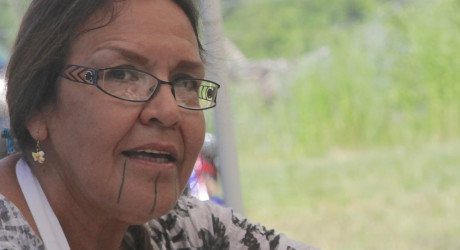 Nadine Martin was among the first of her contemporaries to adopt the tribal moko.
Pat Kruis / OPB

Before Nadine Martin utters a single word, her face tells a story shaped over centuries. Three simple lines extend from her lips to the bottom of her chin, one at each corner of her mouth, the third at the center.

“Some people call it the one hundred eleven,” says Martin. “When the white people started coming into the valley it looked to them like the number 111.”

Martin is a descendant of the Takelma tribe, now one of the Confederated Tribes of the Siletz. And the markings on her face have a long history in Takelma culture.

“It’s not a tattoo,” Martin quickly explains. “It’s a moko.” Members of the Māori tribe call it tā moko (rhymes with “cocoa”). The cultural markings were common among the Pacific Rim tribes until the late 1800s when treaties forced the tribes out of their homelands.

Martin says she’s part of a resurgence of the moko. In her tribe as many as 25 to 30 women have had their faces marked. If you visit the Klamath tribes, the Yurok and the Karok, you may see several women with the lines on their chin.

Martin waited until a Māori shaman was able to perform the ceremony. The process is much like tattooing, but instead of ink the artist uses charcoal, the charred end of a sharp stick. Then the artist abrades the lines with a sharp object, possibly an arrowhead, obsidian or flint.

Historically and from tribe to tribe the markings meant different things. The chin markings were only for girls or women and often accompanied a milestone in life, like entering womanhood. Some accounts say girls received their first marks at age 5, then added a line each year to indicate age. Others consider the lines a mark of beauty or a sign of status.

Despite what the markings meant in the past, the resurgence of the moko today likely means something far different, and may vary from person to person.

“Different marks mean different things,” says Martin. Her lines are thin and simple, while her mother’s lines are thicker and more intricate. Martin says her role in the tribe is to pray, but she has already decided to broaden the lines on her chin as she takes a more prominent role in the tribe.

“Once you’ve taken the mark, you need to walk your talk.”

People who meet Martin often do not understand what they’re seeing.

“In India,” says Martin, laughing, “they thought it was a beard.” She laughs even more deeply. “In Australia they handed me a handkerchief to wipe it off.”

How do they respond in the United States?

“People stare. And I like that, because it reminds me of my ancestors and I feel connected to my ancestors.”

Nadine Martin was among the first of her contemporaries to adopt the tribal moko.