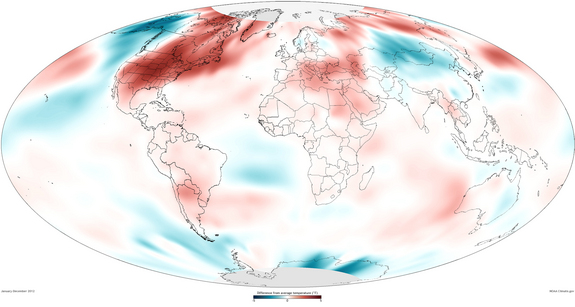 2012 was a year of climate records, from temperatures to ice melt to sea level rise, a newly released report on the state of the global climate says.

Even though natural climate cycles have slowed the planet’s rising temperature, 2012 was one of the 10 hottest years since 1880, according to the report released today (Aug. 6) by the National Oceanic and Atmospheric Administration.

One reason the world’s warming is slower in recent years is because of recent La Niña conditions in the Pacific Ocean, which cause atmospheric and ocean temperatures to cool, said Tom Karl, director of NOAA’s National Climatic Data Center during a news teleconference.”There are a number of factors that cause climate to vary from year to year, but when you look back at long-term trends, temperatures have been increasing consistently,” he said.

But in the Arctic, surface temperatures rose twice as fast in the past decade as lower latitudes, said Jackie Richter-Menge, a report co-author and research civil engineer with the U.S. Army Corps of Engineers. “The Arctic continues to be a region where we have some of the most compelling evidence of the fact that global temperatures are warming,” she said. 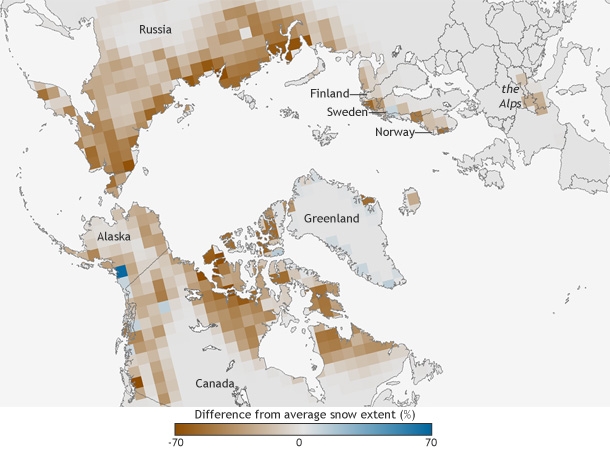 Difference from average annual snow cover since 1971, compared with the 1966 to 2010 average. Snow cover has largely been below average since the late 1980s.
Credit: NOAA

A strong and persistent southerly airflow in spring 2012 contributed to the Arctic’s record warmth, Richter-Menge said. The effects included a record-low summer ice pack extent in the Arctic Ocean, and surface melting across 97 percent of the Greenland Ice Sheet. Richter-Menge said researchers are also seeing long-term changes, such as more coastal vegetation growing in the Arctic tundra and rising permafrost temperatures.

“The near records being reported from year to year are no longer anomalies or exceptions,” Richter-Menge said. “They have become the norm for us and what we expect to see in the near future.” [5 Ways Rapid Warming is Changing the Arctic]

The annual State of the Climate report compiles climate and weather data from around the world and is reviewed by more than 380 climate scientists from 52 countries. The report can be viewed online.

The planet hit several records or near records in 2012, the report said. These include: