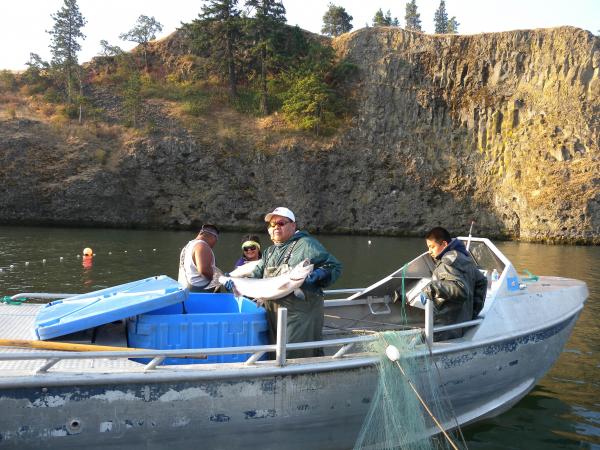 Starting August 19, fishers from the Nez Perce, Umatilla, Warm Springs and Yakama tribes will drop their gill nets in the Columbia River.

During the 2013 fall commercial season, this first gill net fishery can harvest up to 200,000 fish or an estimated 2.5 million pounds of salmon. The fresh catch of salmon, steelhead and coho will be sold commercially directly from Indian fishers to the public. Sales to the public should last into October with peak abundance from just before Labor Day through mid-September. Much of the harvest is sold to wholesale fish dealers and can be found in stores and restaurants around the Northwest and beyond.

Fisheries biologists estimate that the 2013 fall chinook return will be well above average with 677,900 fall chinook entering the Columbia and over 575,000 destined for areas upstream of the Bonneville Dam. Fishery managers also predict a record return of wild Snake River fall chinook and over 130,000 coho.

“Many of the salmon returning to the Columbia River are the direct result of tribal restoration efforts, joint state and tribal programs and several tribal and federal partnerships that are increasing the abundance of salmon in upriver areas,” said Paul Lumley, executive director for the Columbia River Inter-Tribal Fish Commission.

During the harvest, managers actively monitor the returns so they can adjust the harvest levels as needed to keep the fisheries within strict harvest limits established under the US v. Oregon fisheries management agreement.

The tribal fishery offers an ample supply of fish for the public through over-the-bank sales. Common sales locations include: Marine Park in Cascade Locks, Lone Pine in The Dalles, North Bonneville—one mile east of Bonneville Dam, and Columbia Point in Washington’s Tri-Cities area.

Individuals interested in purchasing tribally caught fish should keep the following tips in mind:
•    Sales from tribal fishers generally run from 10 a.m. to dusk.
•    Price is determined at the point of sale.
•    Most sales are cash only.
•    Buyers should request a receipt.
•    Tribal fishers can advise on topics including fish freshness and preparation.

The public is urged to call the salmon marketing program at (888) 289-1855 before heading up the river to find out where the day’s catch is being sold. More information is available on the salmon marketing website http://www.critfc.org/harvest. Follow @ColumbiaSalmon on Twitter for updates.