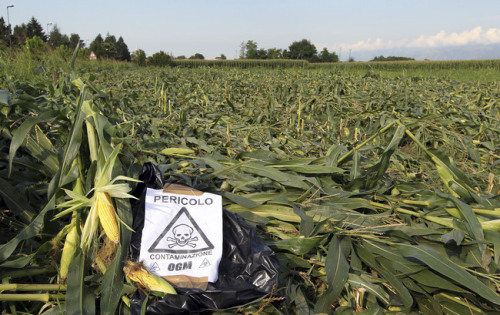 Last Thursday, an intriguing press release from “Monsanto Global” was sent out to to the email inboxes of media organizations all over the world. According to the press release, Monsanto had received approval from Mexico’s SAGARPA (Secretariat of Agriculture) to plant a quarter of a million hectares of GMO corn in Chihuahua, Coahuila, and Durango. This was coupled with the announcement of two new Monsanto-funded institutions: a seed bank preserving Mexico’s 246 native strains of corn, and a museum of Mexican culture, to be established such that “[n]ever again will the wealth of this region’s culture be lost as social conditions change.”

This was certainly interesting, and indeed, the SAGARPA was in fact considering a permit to allow Monsanto to plant the corn. Still, it seemed fishy, and totally unlike Monsanto to admit (even obliquely) that their corporate practices could possibly change Mexican culture and wipe out indigenous corn strains.

Within hours, the domain name linked to in the press release (monsantoglobal.com) was no longer available, and a second Monsanto-branded press release denouncing the earlier announcement went out. This one, sent from an email at a different domain name (monsanto-media.com), claimed that the Monsanto Global press release was the work of an activist group called Sin Maíz No Hay Vida.

The highlights of the strongly-worded message included the following:

“The action of the group is fundamentally misleading,” said Janet M. Holloway, Chief of Community Relations for Monsanto. “The initiatives they put forth are unfeasible, and their list of demands is peppered with hyperbolic buzzwords like ‘sustainability,’ ‘culture,’ and ‘biodiversity.’”

Here is a mirror of both press releases.

Later that day, a post on Monsanto’s blog denied that they had sent a press release about Mexico of any kind that day, stating that “Information on this hoax web site and its related communication properties has been turned over to the appropriate authorities to further investigate the matter.”

I reached out to a spokesperson for Sin Maíz No Hay Vida to find out more about the motivations behind the hoax.

PolicyMic (PM): Can you tell me about Sin Maíz No Hay Vida, who they are, and what their mission is?

SM: Sin Maíz No Hay Vida (Without Corn, there is No Life) is a coalition of activists, students, and artists from Mexico, the United States, Brazil, Canada, Colombia, Uganda, Venezuela, Spain, and Argentina.We are fighting to preserve biological and cultural diversity in Mesoamerica and around the world.

PM: What was the goal of the fake press release?

SM: We wanted to demonstrate the importance of corn (in terms of biodiversity, sustainability, and cultures in Mexico) and to show what is at stake if companies like Monsanto manage to privatize this staple crop. It’s not an exaggeration to say that in Mexico and around the world, there is no life without corn.

We also hoped to raise consciousness about Monsanto’s current application to seed genetically modified corn on a commercial scale in three states in Mexico, a huge expansion of their current projects in Mexico. We wanted remind the Mexican officials at SAGARPA, who have the power to make this decision, that activists are paying attention. We urge them not to grant Monsanto the permit to seed commercially. Finally, we hoped to work in solidarity with other activist groups fighting Monsanto.

PM: What do you believe should be the alternative to growing GMO corn?

SM: I think that question “What’s the alternative to growing GM corn?” assumes that genetically modified corn is a necessity, and it’s not. Monsanto and other producers of GMOs want us to believe that these crops are necessary to sustain a growing population, but in fact, Monsanto is just trying to grow their bottom line by privatizing staple crops around the world. This hurts all of us: farmers, the environment, and just about everyone who eats food. To paraphrase Irina Dunn and Gloria Steinem, we need GM corn like a fish needs a bicycle, and a rusty, blood-thirsty bicycle at that. Have you ever ridden a blood-thirsty bicycle? It’s a terrible experience.

PM: Do you have any info on the website coming down?

PM: What do you think of Monsanto’s response?

SM: It’s interesting that Monsanto was frightened enough by activists paying attention to their actions that they quickly denounced us online and on social media. I think I’d be happier, though, if they had withdrawn their petition to seed commercially in Mexico. I expect them to do so any minute now.

PM: What are some resources you can recommend for everyone reading who wants to get involved?

SM: We’re compiling resources for activists on our blog, especially links to activist groups in Mexico and the United States who are have been fighting Monsanto. If you want to help mobilize against Monsanto or to suggest a group that we should link to, please visit our blog.