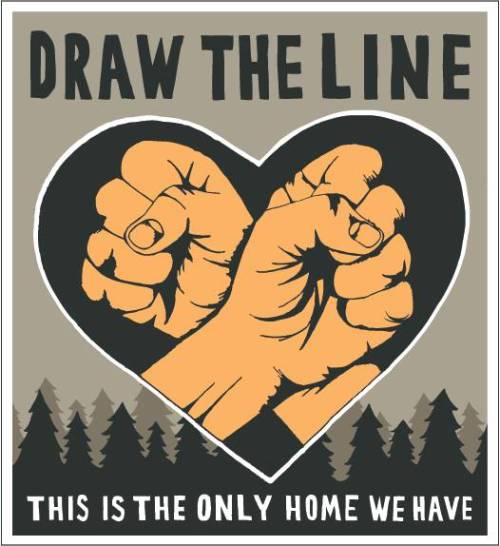 This has been a busy summer for climate activists — with actions against the fossil fuel industry taking place on a near daily basis around the country. But busy is not the word they are using. They prefer to describe their efforts this summer as fearless. And why not? They are, after all, facing off against the largest, most profitable industry in the history of the world.

Nevertheless, this fearless action is not without strategy. In fact, the term Fearless Summer is being used to unite climate campaigns across the country that are working to stop fossil fuel extraction and protect communities on the frontlines. By coordinating collective action under the same banner, the aim is to speak as one voice against the fossil fuel industry.

To better understand how Fearless Summer came to be and what it’s accomplishing, I spoke with one of its coordinators, Mathew Louis-Rosenberg, who works in southern West Virginia fighting strip-mining — both with the community organization Coal River Mountain Watch and the direct action campaign Radical Action for Mountains and Peoples Survival.

How did the idea for the Fearless Summer come about?

Fearless Summer grew out of a discussion at the first Extreme Energy Extraction Summit held last February in upstate New York. The summit brought together an incredibly diverse group of 70 activists from across the country fighting against coal, gas, oil, tar sands, uranium and industrial biomass to create a more unified movement against energy extraction. We created shared languages, fostered relationships across the diverse spectrum of groups working on the issues and provided space for dialogue that allows innovative collaborations to form. Fearless Summer was one such collaboration.

Who are the principle organizers and groups involved? And how do you coordinate between one another?

Fearless Summer is an open-ended organizing framework and a call-to-action. So it’s difficult to say who the “principle organizers” are. There has been a core group of folks helping to coordinate and create infrastructure that includes organizers across a wide spectrum of groups, such as Radical Action for Mountains and Peoples Survival, Missourians Organizing for Reform and Empowerment, Peaceful Uprising, Food and Water Watch, Green Memes, Tar Sands Blockade, the student divestment movement and others. Coordination work has primarily been done through a listserv and open, weekly conference calls. There is no formal organizing or decision-making structure.

How does this build on last year’s Summer of Solidarity initiative and the actions that have happened since? Do you see it as an escalation?

Fearless Summer was explicitly conceived of as a next step beyond last year’s Summer of Solidarity. I think the intention and scale of Fearless Summer is the escalation. Summer of Solidarity arose out of the organizers of several large actions — the Mountain Mobilization, Coal Export Action, Tar Sands Blockade and Stop the Frack Attack — recognizing that we were all planning big things in a similar timeframe and by working together, primarily through social media, we could amplify each other’s messages rather than compete for attention. The hashtag #ClimateSOS took off and had a life of its own, but coordination never went beyond that core group. Fearless Summer was explicitly launched as an open framework intended to draw in as many groups and actions as possible and came with a clear statement of purpose. This time we engaged a much much wider spectrum of groups and actions under clear principles of unity and escalation. Fearless Summer has gone beyond social media coordination to really create some national dialogue between grassroots groups on presenting a united front on energy issues.

How does Fearless Summer compliment or differ from the many other summer initiatives going on, such as 350.org’s Summer Heat and indigenous peoples’ Sovereignty Summer? Did you coordinate with those organizers?

We see these efforts as highly complementary. We are probably most similar to Sovereignty Summer in how we are organized. Many current indigenous sovereignty struggles are deeply connected to struggles against energy industry attacks on native lands and we have been promoting many such struggles through Fearless Summer. We have also been talking extensively with 350.org organizers about the connections with Summer Heat, which is obviously different due to the central coordination through 350.org and a much more focused timeframe. Fearless Summer is an open framework for action through the summer, so any other similar organizing efforts strengthen the goals of Fearless Summer regardless of how coordinated they are with us.

How many actions have taken place under the Fearless Summer banner so far?

It’s really difficult to say. The trouble with an unstaffed, unfunded, open collaboration is that it’s hard to keep up with where people are taking things. Our kickoff week of action in June had at least 28 actions in six days and there have been dozens more outside of that. At least 50-60.

What actions are coming up?

To be honest, I don’t know. There’s still a lot going on. We’re hosting an action camp in West Virginia and I’ve heard whispers of big plans in other parts of the country, but at this point people are just taking the framework and running with it as we intended.

What are the plans for the fall and beyond?

Those conversations are happening right now. I think people want to see coordination move to the next level of acting together nationally on some common targets more and there’s also a lot of talk about connecting more with other social justice issues and talking about root causes. The second Extreme Energy Extraction Summit is coming up September 6-10 and a lot of discussion will happen there.

Are you feeling optimistic about the larger climate justice movement at the moment?

I am feeling optimistic about the movement. We see more and more communities getting active. It’s getting harder and harder for the energy industry to find anywhere to operate without resistance. And it’s having an impact. The president’s speech and climate plan, despite its deep flaws, speak to the impact we are having. Four years ago, Obama was telling student leaders that he couldn’t do anything without a large scale public pressure movement. We have that now. I think we have a long way to go still. A lot of work still needs to be done to engage a wider base, connect with other struggles around justice and root causes of climate change, and articulate a policy platform that solves the climate crisis in a just and honest way. On the action front, we are still a long way from where the nuclear freeze movement was — with thousands occupying power plants and test sites — doing jail solidarity and really creating a concrete problem for the industry beyond public relations.

If momentum continues to build in the next year, where do you see it coming from? And what might the work of activists look like next summer?

I’m not sure what the big catalyst could be. So far the growth of the movement has mostly been in a proliferation of local campaigns. I think it’s going to take a lot of national dialogue to knit those into collective action for collective wins. My hope is that by next year we will be seeing mass direct action that truly challenges the ability of legal systems to respond and corporations to operate. We need more people acting like their children’s lives are on the line. Because they are.