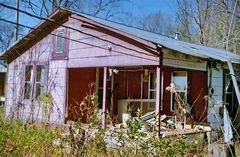 Photo courtesy of John Lovick
Snohomish County Executive John Lovick was raised by his grandmother in this house in Robeline, La. It had no running water when Lovick was a child.

He was 12, old enough to know what it meant.

Lovick grew up in the tiny town of Robeline, in Louisiana’s Natchitoches Parish.

He was raised by his grandmother, Elsie Lee Lovick. A mother of 11, she had picked cotton and scrubbed floors to support the family. Their house had no running water.

Robeline was far from Washington, D.C., where on Aug. 28, 1963, tens of thousands of people joined the March on Washington for Jobs and Freedom. The march ended with Dr. Martin Luther King Jr.’s history-making “I Have a Dream” speech at the Lincoln Memorial.

Many Americans watched the landmark events of the Civil Rights Movement in their living rooms. Lovick didn’t have that luxury.

“We didn’t have a TV. We would hear about it, or listen to the radio. Obviously, we knew these things were going on,” said Lovick, 62, who lives in Mill Creek.

For a child in a segregated school, in a region that was ground zero in the struggle for racial equality, King was a towering figure.

“There were conversations about him in school — always Dr. Martin Luther King. He was the one black public figure you could really see,” Lovick said.

Lovick said that as a boy in Louisiana, “not in a million years did I imagine I’d be executive of a very large county — that level of success.” Yet he took to heart a message brought forth by King’s powerful words.

“As I watched him, as I listened to his speeches, he always said things were going to change. There will be opportunities. He wanted to make sure we were prepared, by staying in school, staying out of trouble,” Lovick said.

“Things were very, very tough growing up down there. But there’s a future out there. It was a message that always resonated with me,” said Lovick, who served in the U.S. Coast Guard, and as a State Patrol trooper, a state lawmaker and as county sheriff before being chosen in June to lead Snohomish County after Aaron Reardon’s resignation.

The systematic segregation of Lovick’s childhood is gone, but not the hurtful memories.

In all his years of school in Robeline, where Lovick graduated from Allen High School in 1968, he never had a white classmate. “It was just the way life was,” said Lovick, who remembers seeing school buses go past carrying white students.

Schools in his Louisiana town remained segregated long after the U.S. Supreme Court’s 1954 Brown v. Board of Education ruling that found separate educational facilities are unequal. In 1957, King had taken a strong stand in the fight for integration of Central High School in Little Rock, Ark.

It wasn’t until the early 1980s, Lovick said, that Allen High in his hometown was ordered closed by a federal judge.

There was dismay in his voice as he described a visit to Robeline after finishing boot camp in 1970. “I went to a movie theater and had to sit in a segregated section — in my Coast Guard uniform. There was a sign, ‘colored,’ with a finger pointing in one direction,” he said. “That stirred up some terrible memories.

During his boyhood, the Ku Klux Klan was active. Lovick said his grandmother, who died three years ago at 97, feared for his safety when he would walk home. “She was always afraid of what would happen to me. At the time, there was a lot of hatred,” Lovick said.

He recently saw “The Butler,” based on the true story of a black man who worked 34 years, under eight presidents, as a White House butler. With its sweep of history, Lovick said the movie was a reminder that “a lot of people sacrificed and suffered for me to be here.”Lovick shared another painful memory. His grandmother, he said, would “crawl on her knees scrubbing floors, but she couldn’t walk in the front door of the house where she worked.”

Yet he chooses to turn away from bitterness, embracing King’s message of love and forgiveness. “Hating people is too much of a burden for me to bear,” he said.

When King spoke those words — “I have a dream today” — Lovick said he was a little too young to join in demonstrations for civil rights.

“I have tremendous admiration for those people who did the hard things,” he said. “I don’t know right now if I would have had the courage to do what they did.”

‘I Have a Dream’ event at EvCC