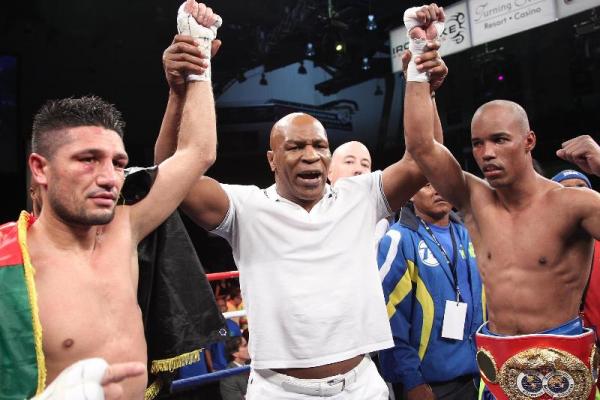 “I want to be here and at the best interest of the fighters,” Tyson said on his return to boxing in the role of promoter. “I don’t know where it’s going to lead me, this is just my first event and I’m just really grateful.”

Todd Grisham, host of Friday Night Fights, asked Tyson what he had learned from his previous promoter, Don King.

“I learned not to abuse my fighters,” Tyson said, adding that he did not hold any animosity toward King

Similarly, Iron Mike Productions describes itself as being “committed to changing traditional boxing promotion by advocating for our fighter’s success inside the ring and out.”

The ESPN2 live broadcast began at 9 p.m. with the duel for vacant World Boxing Association featherweight interim title between Claudio “The Matrix” Marrero (14-1, 11 Kos) of the Dominican Republic and Jesus Cueller (23-1, 18 KOs) of Argentina with Cueller unanimously winning the 12-round bout.

The main event, the fight for the International Boxing Federation junior lightweight title, between champion Argenis “La Tormenta” Mendez (21-2, 11 KOs) of the Dominican Republic and Arash Usmanee (20-1, 10 KOs), originally of Afghanistan, now in Montreal, Quebec, ended in a majority draw.

Tyson surprised long-time boxing fans before the show by hugging Teddy Atlas, a well-known trainer and commentator. Atlas and Tyson had a well-publicized dispute in 1983, leading to Atlas’ discharge from the Catskill Boxing Club in Catskill, N.Y. where the two were training under Hall of Fame trainer Cus D’Amato.

“Life is short,” Tyson said when asked about the hug. “I owe it to my sobriety to make amends.”

“Turning Stone is extremely proud that Mike Tyson chose our award-winning resort for his first fight as a promoter,” said Oneida Indian Nation Representative and Nation Enterprises CEO Ray Halbritter on Oneida Indian Nation’s website. “As an incredible athlete and renaissance man who continues to reinvent himself, we understand that Tyson could have gone anywhere for his debut, and we are deeply honored he chose Turning Stone.”

Oneida Indian Nation, located in central New York, is one of six Haudenosaunee, or Iroquois, nations.

This was the sixth nationally televised boxing show at Turning Stone Resort Casino, and the third on ESPN, since September 2012.

Turning Stone Resort Casino, in Verona, N.Y. about 30 miles east of Syracuse, was named “Most Excellent Golf Resort” in 2010 by Condé Nast Johansens and “Casino of the Year” in 2009 by the Academy of Country Music.