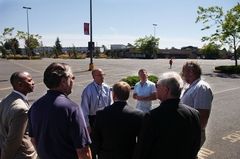 By Jerry Cornfield, The Herald

EVERETT — These days the parking lot is pretty empty at College Plaza, an aging strip mall covering a long block on North Broadway.

There’s a barber shop and a nail salon, a store where most everything costs a dollar and a pay phone that works. And there’s lot of empty storefronts.

Flip the calendar ahead three years and passersby could be gazing at the cornerstone of a Washington State University branch campus.

WSU secured $10 million in state funds this year to design a 95,000-square-foot building near the corner of North Broadway and Tower Street.

The site is envisioned as the future home of the University Center of North Puget Sound, a consortium of four-year colleges including WSU that now conduct classes across the street in Everett Community College’s Gray Wolf Hall.

But by the time the building opens, WSU is expected to be running the consortium, having cemented its place in the city.

“It needs to be here because this is where the students want to go,” said Rep. Hans Dunshee, D-Snohomish, after completing a tour last week of the plaza site with other lawmakers and representatives of the city and community college.

He brushed off a question on whether he hoped this structure would lead to a full-throttled branch campus.

“I won’t call it a name or anything. That’s just where you put the building,” he said. When people drive by they’ll know it’s WSU and they’ll get excited, he said.

All of this came together fairly quickly.

As part of the deal, WSU prepared a long-term operating plan and it predicted the University Center would run out of space by the end of the decade as enrollment rises from 465 students a year ago to nearly 1,200.

Everett Community College owns College Plaza and uses it for parking. Conversations last year led to the proposal for the building in the plaza and to acquire three nearby properties for development of a parking lot. The targeted parcels include the Everett Trailer Court and the property with a Subway sandwich shop and a 7-Eleven store.

EvCC President David Beyer said the presence of the college and WSU on both sides of North Broadway will give the area a whole new feel — and be a boost to the profile of both institutions.

“It will mean something for the community,” he said. “That’s been our whole thrust is to get ourselves out there so we are not looked at as that old campus in North Everett.”

Dunshee, who is chairman of the House Capital Budget Committee, had to muscle the $10 million into the state’s construction budget over the objections of his counterparts in the Senate Majority Coalition Caucus.

Of the money, $7 million is for the design work and the rest is for land acquisition.

Paul Pitre, special assistant to WSU President Elson Floyd, said there’s not a specific timeline for finishing either task. But conversations are under way at the university as officials keep in close contact with lawmakers, the community college and the city at each step.

Many issues lie ahead. For example Everett Mayor Ray Stephanson encouraged Pitre to make sure trailer court residents are given as much as two years to relocate.

Finding the funding to build will be an issue, too. The Legislature probably won’t address the money issue until 2015.

“I’m encouraged that we’re moving forward on this,” he said. “It won’t be the last building. Once you start down this road, you keep working on it.”