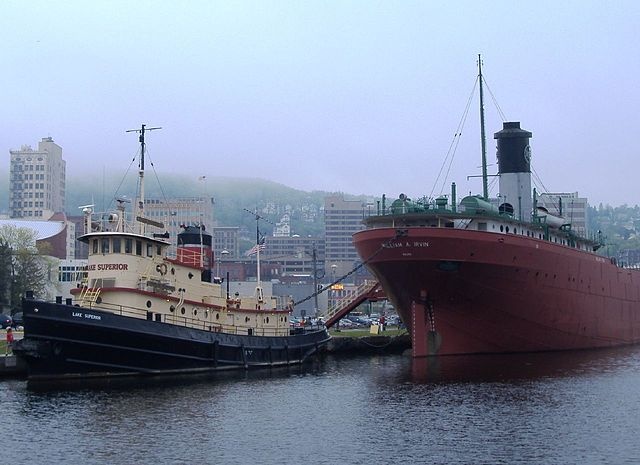 Apparently the women are sold for “parties” on American ships. Picture via WikiCommons

Native women, children, and even babies are being trafficked in the sex trade on freighters crossing the Canada-US border on Lake Superior between Thunder Bay, Ontario, and Duluth, Minnesota.

Next month, Christine Stark—a student with the University of Minnesota-Duluth, who is completing her master’s degree in social work—will complete an examination of the sex trade in Minnesota, in which she compiles anecdotal, firsthand accounts of Native women, particularly from northern reservations, being trafficked across state, provincial, and international lines to be forced into servitude in the sex industry on both sides of the border.

Stark’s paper stems from a report she co-wrote, published by the Indian Women’s Sexual AssaultCoalition in Duluth in 2011, entitled, “The Garden of Truth: The Prostitution and Trafficking of Native Women in Minnesota.” Through the process of researching and writing this report, Stark kept hearing stories of trafficking in the harbors and on the freighters of Duluth and Thunder Bay. The numerous stories and the gradual realization that this was an issue decades, perhaps centuries, in the making, compelled Stark to delve further into what exactly was taking place.

She decided to conduct an exploratory study, “simply because we have these stories circulating and we wanted to gather information and begin to understand what has happened and what currently is happening around the trafficking of Native American and First Nations women on the ships” said Stark, in an interview with the CBC Radio show Superior Morning. “Hearing from so many Native women over generations talking about the ‘boat whores,’ prostitution on the ships or the ‘parties on the ships,’ this is something that… was really entrenched in the Native community and we wanted to collect more specific information about it.”

Through her independent research and work with the Indian Women’s Sexual Assault Coalition, Stark interviewed hundreds of Native women who have been through the trauma of the Lake Superior sex trade. The stories she’s compiled are evidence of an underground industry that’s thriving on the suffering of First Nations women, which is seemingly going unchecked and underreported.

In an article written for the Minneapolis Star Tribune, Stark describes one disturbing anecdote of an Anishinaabe woman who had just left a shelter after being beaten by her pimp—who was a wealthy, white family man. He paid her bills, rent, and the essentials for her children, but on weekends, “brought up other white men from the cities for prostitution with Native women… he had her role play the racist ‘Indian maiden and European colonizer’ myth with him during sex.”

The fact that these horrendous crimes are taking place right under the noses of North American authorities is obviously disturbing and somewhat surprising, considering we have a Conservative government that is oh-so-tough on the commercialization of human beings. However, the word trafficking can often be a blurry one.

I spoke with Kazia Pickard, the Director of Policy and Research with the Ontario Native Women’s Association based in Thunder Bay. Their organization has also been researching this issue. Kazia told me over email: “People assume that trafficking always takes place across international borders, however, the vast majority of people who are trafficked in Canada are indigenous women and girls from inside Canada and sometimes, as we’re now starting to understand, across the US border.”

In an earlier interview with the CBC, she also alluded to the possibility that there was trafficking taking place across borders in Southern Ontario as well. She made it clear to me that the image most people imagine when they think about “human trafficking” often isn’t accurate: “The majority of women who are trafficked in Canada are indigenous women and girls. So it’s not that you have people being trafficked across international borders in shipping containers or something like that.”

In most cases it’s a lot more subtle. “Women may say they [have been pulled into it by] a boyfriend, there have been some reports of family members recruiting women into the sex trade… so it doesn’t appear in this sensationalized way that we may [think it is].”

All that said, there are nearly 600 aboriginal women who are currently missing or believed to have been murdered in Canada, a number the RCMP—who are being accused of human rights abuses against aboriginal women on a monthly basis—have publicly questioned.

And while it’s refreshing to hear Canadian Parliament members (particularly Conservative ones) such as Manitoba’s Joy Smith show some honest compassion, on the whole, the government’s attitude and response to protecting vulnerable Native women has been one of indifference. In July, the federal government dismissed calls made for an inquiry into missing or murdered Indian women by the provinces and territories’ premiers.

Christine Stark’s report is one that cannot be ignored. If the government is as serious as they claim to be about human trafficking, they can’t dismiss what’s taking place between Duluth and Thunder Bay the same way that they have regarding the 600 missing First Nations women. To ignore this issue would point to an obvious double standard when it comes to the treatment of Indian women, many of whom are clearly being taken advantage of.