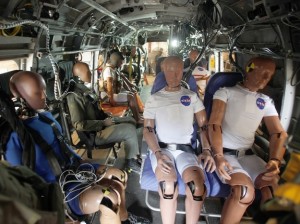 The dummies will test seatbelts and other technologies during a crash test in which the helicopter will be dropped from a height of about 30 feet.
Credit: NASA Langley / David C. Bowman

In the name of science and safety, NASA researchers on Wednesday (Aug. 28) will drop a dummy-packed helicopter from 30 feet in the air and you can watch it wreck live.

The test, which is aimed at improving aircraft safety features like seats and seat belts, will be broadcast at 1 p.m. ET from NASA’s Langley Research Center in Hampton, Va. FULL STORY: NASA Will Crash Helicopter for Science Wednesday