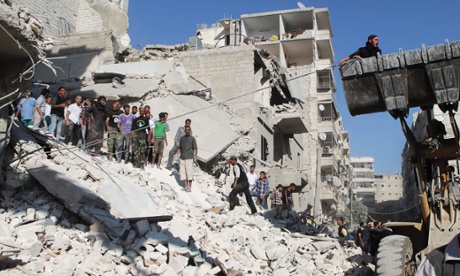 The briefings with congressional leaders would be given by the secretary of state John Kerry, and secretary of defence Chuck Hagel, officials said. Photo: Reuters

Senior US intelligence officials were seeking to persuade Congress on Thursday that the Syrian government was responsible for chemical weapons attacks, as the White House resisted comparisons with intelligence failures in the run-up to the Iraq war.

Leaders of key congressional committees were due to participate in “unclassified briefing” by telephone on Thursday, amid signs that some of the support for military strikes against Syria is fading.

A separate, unclassified report on the US intelligence assessment is being prepared for release to the public before the end of the week.

The UK released an intelligence assessment on Thursday that said it was “highly likely” that the regime of Bashar al-Assad was responsible for a chemical attack that killed hundreds in a Damascus suburb last week.

However, the document contained few specifics, and failure by the US and UK to say with absolute certainty that the attacks were conducted by the Syrian government have prompted challenging questions in Congress and led to signs of growing anxiety among traditional US allies.

It has also prompted comparisons with Iraq in 2003, when the US launched an invasion on the pretext of weapons of mass destructions that were never found. “As it relates to the situation in Iraq, I don’t agree these are similar situations,” deputy press secretary Josh Earnest told reporters Thursday.

Earnest said any strikes carried out by the US and its allies would be “discreet and limited”.

In a sign of the importance the White House is attaching to support from Capitol Hill, the briefings with “congressional leaders and the chairs and ranking members of national security committees” would be given by the secretary of state John Kerry, and secretary of defence Chuck Hagel.

Separately, Obama personally briefed the Republican leader of the House of Representatives, John Boenher. A spokesman for Boenher said in a statement he had raised the question of the legality for any military strike and pressed him to consult further with Congress.

Republican senator Jim Inhofe, the ranking member of armed services committee, said he was opposed to using force in Syria when military resources are depleted and there was insufficient evidence of regional backing. “It is vital we avoid short-sighted military action that would have little impact on the long-term trajectory of the conflict,” he said. “We can’t simply launch a few missiles and hope for the best.”

Obama was criticised for failing to consult Congress sufficiently before air strikes in Libya in 2011. However, there is no sign the White House would seek a Congressional before launching strikes.

In London, prime minister David Cameron laid out Britain’s case for possible military intervention in a parliamentary debate, but doubts remain over whether the House of Commons would approve a joint action with the US. In an attempt to prevent a parliamentary defeat, Cameron committed to a second vote after UN inspectors have completed their report on the chemical attacks in Damascus.

France has also called for a delay to any military action until the UN inspectors complete their work.

The UN secretary general, Ban Ki-moon, instructed the 20-strong inspection team in Damascus to leave on Saturday, a day before they had expected to leave. Ban also announced the team would report to him immediately on departure.

Military and foreign policy experts were split over whether the US would forge ahead with cruise missile strikes against Syria. Obama, who has long been reluctant to be engaged militarily in the Middle East, is now considering the prospect of taking military action with less international support than George Bush’s 2003 invasion of in Iraq.

However, Earnest, the White House deputy spokesman, seemed to confirm that was a possibility when he was asked whether the US would “go it alone”.

Analysts said that with the Arab League condemning Syria but not backing military action, and no prospect of a UN security council mandate, reluctance on the part of Britain and France could prove a problem for the US.

Michael O’Hanlon, the director of foreign policy research at the Brookings Institution, said fading international support was “regrettable”, the Obama administration was unlikely to pull back from the brink at this stage.

Sean Kay, a Nato expert at Ohio Wesleyan University, said it looked likely that the US would attack Syria with or without the UK. “I think they’re trying to make it clear they’re determined to move forward,” he said.

Many in Washington believe military action is a fait accompli. UN weapons inspections were ordered to leave Syria ahead of schedule on Thursday ahead of schedule amid mounting anticipation of US-led military strikes. But others argue that doubts over intelligence and lack of support from key allies could delay or even lead to the abandonment of military action.

Doug Bandow, a senior fellow at the Cato Institute, detected that “caution has grown” in the White House over the last 24 hours.

“I think they’ve found over the last couple of days both a lack of support at home, both among the American people and Congress, and then they look internationally and suddenly they don’t feel quite so surrounded by friends,” he said.

Bandow said that an “embarrassing backdown” by the US remained a possibility, and predicted that doubt in Britain, and lack of support elsewhere, would delay any strikes.

Britain’s joint intelligence committee (JIC) concluded it is “highly likely” that the regime of Bashar al-Assad was responsible for the chemical weapon attacks in Syria. But the assessment was mainly based on “open source” evidence such as video footage of the victims, and a judgment that the opposition does not have the capability to launch such an attack. It described the evidence base of a deliberate attack to clear opposition from suburbs in Damascus as only “limited but growing”.

Chairs and ranking members of key congressional committees, who have been briefed on the intelligence, have endorsed the view that Assad’s forces were responsible for the attack.

But all have stopped short of saying the evidence is unequivocal.

Citing “multiple US officials”, the Associated Press reported on Monday that there were gaps in the US intelligence picture, which was “thick with caveats”.

Greg Thielmann, a former State Department intelligence analyst, said the Syria crisis reminded him of the one preceding the Iraq war. “There are enough similarities that it makes one very nervous,” he said. “This rhymes with what happened over Iraq WMD.”

One of the few voices of caution inside the US intelligence agencies when compiling the infamously erroneous 2002 National Intelligence Estimate on Iraq, Thielmann said that post-Iraq intelligence reforms give him confidence that the spy agencies are not overstating their case.

But he raised questions about the seeming vagueness in the intelligence. “I would have thought there would be incentives inside the intelligence community to find out what’s going on that the US would have gotten some samples and established a chain of custody,” he said.

Ken Pollack, a former CIA analyst now at the Saban Centre for Middle East Policy, said that with continuing uncertainty over the intelligence picture, and no obvious legal mandate for military action, the US will be desperate to secure more international backing to argue intervention is “legitimate”.

“If the administration can’t even count of the full-throated support of our closest ally, the country that stuck by us even during the worst days of Iraq, that legitimacy is going to be called into question,” he said.