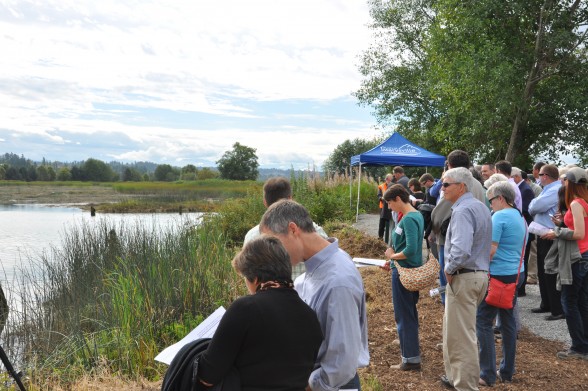 State and local politicians along with environmentalists toured the estuary while learning about the extensive undertakings that are part of the complex project that will restore the estuary to it’s natural function. Photo by Monica Brown

Restoring 400 acres of estuary land is not a mediocre task and has required years of dedication from many groups. The complexity of the restoration project has spanned fourteen years and is nearing completion. With just over a year left in the project the, the final stage is to  lower the southern levee and remove the tide gate.

The tide gate and levee drain the fresh water from the land and prevent any water from flowing back into the estuary. With the completion this winter of the setback levee on the western side, the southern levee, which runs along the northern edge of Ebey Slough, will be breached and the tide gate removed allowing the saline and fresh water to mix.

The Tulalip Tribes, along with the City of Marysville, Army Corps of Engineers, National Oceanic and Atmospheric Administration, U.S. Fish and Wildlife, Washington State Department of Ecology, and the Natural Resources Conservation Service have collaborated on this project and representatives were invited along with local and state politicians to view the progress that has been made.

Visitors were led into the estuary and taken on a brief walk to view the channel opening. Afterwards they were invited to the Hibulb Cultural Center for lunch and a discussion the estuary project in its final stage.

The restoration’s completion is expected to increase the salmon and migratory bird population and bolster the native vegetation in the area. 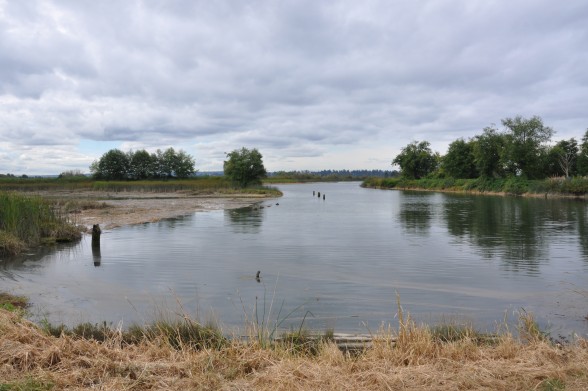 The collaboration between tribal, local, county, state, and federal agencies will restore the natural water flow in the 400 acre estuary. Photo By Monica Brown 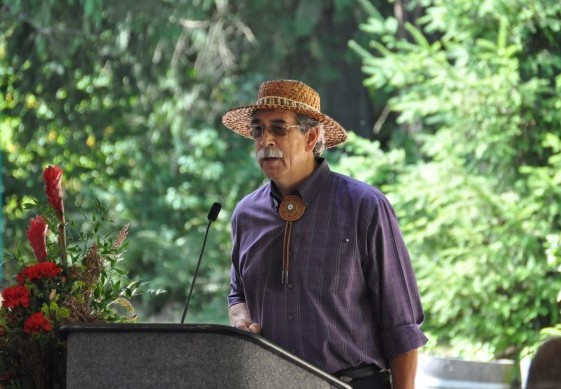 Mel Sheldon, Tulalip board chairman, reminisced during the lunch after the tour about when the project was just getting started 14 years ago. Photo by Monica Brown