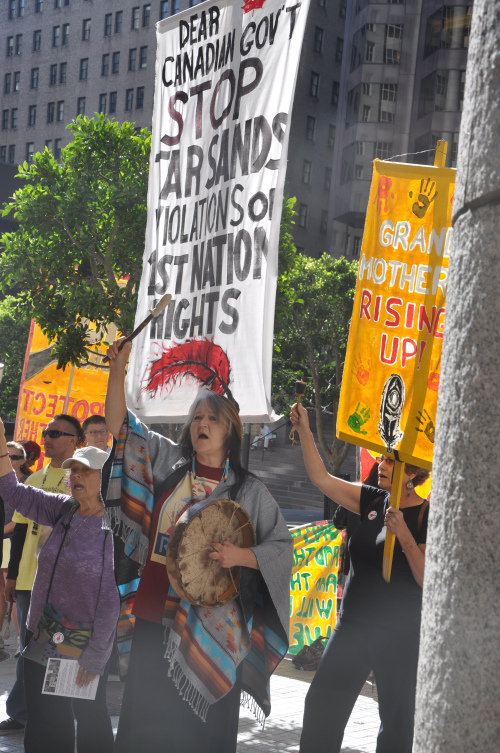 On Monday morning, Sept. 9, organizers from Idle No More Bay Area and supporters converged on the Canadian Consulate in San Francisco, Calif. to say “Shame on Canada.” They called for a stop to the disastrous effects on First Nations people and others in the sacrifice zone in Alberta, Canada due to tar sands mining and steam drilling, citing loss of livelihood, toxic contamination, cancers, and damaged and sick children. People called for a rapid wind down of tar sands mining, a halt to Keystone XL pipeline, sequestration of the wastewater, restoration of the devastated region, and reparations. Pull in the tentacles of the oil companies from around humanity’s neck!

During the several hours that people demonstrated, sang, prayed and drummed at the Consulate, a proclamation and list of demands was signed by everyone present and delivered to Consulate officials by Penny Opal Plant, one of the organizers of the demonstration.

Other co-sponsors of the on-going protests against Tar Sands development and the Keystone pipeline include Rising Tide, Do the Math and 350.org.