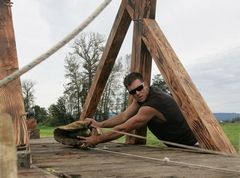 Sarah Weiser / Herald 2010 file
Csaba Mundi, of the Log-Craft Trebuchet, prepares his team’s pumpkin for hurling during the third annual Snohomish Pumpkin Hurl at Bartelheimer Farm. The Log-Craft, named after Mundi’s furniture business, includes an elk hide sling for the pumpkin. Its longest hurl of the day was 387 feet.

By Ashley Stewart, the Herald

Pumpkins will be smashing this weekend.

Medieval catapults will send the orange orbs into the air during a two-day event to open the Snohomish Festival of Pumpkins.

Teams will bring in custom-built “punkin chunkin'” machines to the Snohomish Pumpkin Hurl and Medieval Fair, beginning Saturday, to see who can hurl the gourds farthest, like the previous 1,866-foot world record that was set at the event one year.

“The air literally vibrates with the power of the throw,” event manager Debbie Carlson Gould said.

“It’s a kind of physical thrill just to be standing near.”

And there’s a lot more to do than watch.

Visitors are encouraged to dress up in period costume or any other family-friendly costume — that includes zombies and comic book and movie characters, Gould said — and enjoy all things medieval.

Families can launch their own pumpkins with air cannons or small-scale trebuchets, shoot arrows, fight it out on Viking shield walls or try on chain mail shirts.

Kids can take part in mock battles like the fully armored mounted knights who will travel the grounds.

There have been knights on horseback in past events, but this year, they will joust.

“When the horses are running — and these are big horses — just the thump and the vibrating of the hoof clopping toward you, it’s so exciting,” Gould said.

“They give families a chance to unplug from all the electronics that we are bombarded with get out under sky and make wonderful, lasting memories together,” Gould said. “They can connect with each other and with nature.”

Admission is $7.50 general and free for children 4 and younger.