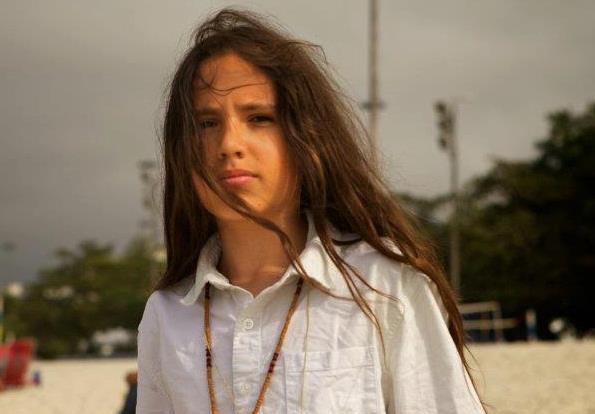 Xiuhtezcatl Martinez, (his first name pronounced ‘Shoe-Tez-Caht’) is a 13-year-old indigenous environmental activist, rapper and public speaker from Boulder, Colorado. He is also the youth director of Earth Guardians, a youth based environmental non-profit organization that is committed to protecting the water, air, earth, and atmosphere.

At the early age of six, Xiuhtezcatl began speaking to crowds at rallies and demonstrations and has spoken at such events as the United States iMatter March in Denver in 2010, which was attended by more than 2,000 youths and other events. He has also worked with Boulder City council members to change city policy and has traveled to several countries and cities to include Rio De Janeiro and Washington D.C. about environmental concerns for Mother Earth.

This year, he has been invited to speak at the United Nations. He is also the youngest member of the 2013 Presidential Youth Council.

A piano composer whose music was used in a documentary that featured him and was filmed by Peter Gabriel’s organization – Witness, recently did an interview on Native Trailblazers radio. During the interview the young Earth Guardian shared his message of strength and hope and how he hopes to remain an inspiration for others.

How did you get started doing what you are doing?

That is a great question. I have been doing activism since I have been six years old. Also we’ve been organizing rallies and educating kids at schools. Kids can be inspired to become activists, leaders and change makers in their community.

Tell me about you as a hip-hop singer with impressive videos.

We have a performance group and we write positive rap songs with lyrics to educate and inspire kids. Kids these days, teenagers these days, everyone is listening to music. That is a huge part of our culture in general. There is a huge hip-hop culture, including slam poetry and break dancing. There are all of these different branches off of hip-hop culture.

Can you talk about your song “Be the Change?”

We got this idea to write a song that was a little bit different and outside the box. We want to make the song uplifting and empowering so that when people hear it, they will say, ‘Dang, I want to do something about fracking, about climate change or about the next generation’s future.’

The song is based on Mahatma Gandhi’s theory and most famous quotes, ‘Be the change that you wish to see in the world.” He is a huge role model of mine.

It is a really cool inspiring song and I hope everyone likes it.

Can you explain your Earth Guardian movement?

The Earth Guardian movement is a gateway and a portal to act for people of any age. No matter whom they are or where they are in the world. It doesn’t matter what your status is in society – none of this matters, we can all be Earth Guardians.

This movement is growing globally. People can see young people standing up in their communities and they are changing things that are not working, so that their world is a better place.

When people see this, they say, “I want to do something similar to that.’ people tell me they have a 12-year-old son who wants to get involved, we get such e-mails all the time. It is very hard to keep track of everything. Right now we have 30 requests to set up Earth Guardian groups. Right now there are places in Canada, Germany, France in other places around the world are requesting these Earth Guardian groups. There are groups going now in Australia, Brazil, India and Africa.

You are also a public speaker in a lot of places aren’t you?

There is a large rally in Washington D.C. called Powershift. Out of the thousands of requests they receive each year, this year they accepted my application to deliver a presentation. I will be giving a presentation on the global effects of fracking. We are currently working on fundraising for that.

In New York there will be a huge U.N. conference at the end of September. It is about the global water crisis and what people are doing about it around the world. If you think about it, water is the most basic necessity of life. If we do not have access to clean sustainable water supply, we do not have life. This is a human rights issue.

The Pope is going to stream in, the Dalai Lama is going to stream in about the water, so it is a huge deal. Young people and activists from all over the world have been asked to come in and talk. They invited myself and representatives from the other Earth Guardian groups in Australia and Africa and others.

All of these leaders will be tuning into this conference. Never before in history, have we had the opportunity to stay connected with social media. All of these things are keeping our world connected. This is how movements are starting to spread all over the world.

Ultimately we are all working together toward the same thing, to create a better future for the next generation. Whether it is working on the water crisis, hunger – we are working on creating a better world for people.

Can you tell us about your song – “Live as if our Future Matters?”

We cannot wait for our government to change the world, before power, before money, before greed – their purpose is to protect people. In my eyes they have failed us at that, so now it is time for the people to stand up for themselves and to be part of this global movement that is going to change the fundamental beliefs of our entire society.

Who is the other young guy in your video?

That is my younger brother. He is an amazing rapper who has a great stage presence. He is so adorable and everyone loves him. He comes out with his black pants and black leather jacket like Michael Jackson everyone goes crazy, he doesn’t like to speak.

He is so great to have around. We’ve gone to Australia, Oregon, and Rio de Janeiro. In Brazil we had a four-hour bus drive; we spent the whole time laughing. That was great, if I didn’t have him with me on my side, I don’t know that I could do it.

What can kids do?

I go to school and I have advanced classes so I have a lot of extra work but I still play soccer – someone cannot force you to do this you have to ask yourself is this something that is important enough to take time out of my everyday life to do something like this. Kids don’t understand this really is not a joke. You know it’s not about polar bears and icecaps you have to turn this into something that affects us in our own backyard. Nature is not a separate being from us.

When we can realize the problems of the Arctic and Alaska and Africa and the Amazon rain forest they are our problems too – we come from the same planet and as soon as we recognize that, then they will be willing to make a change.

Do your teachers get nervous when you raise your hand in class?

(Laughs) In general I’m a very talkative person. My teachers don’t want to call on me because I talk forever.

Do you have any last words?

My school is giving the award for all the work that I’ve been doing, and that is very exciting to be recognized. To all the young people and adults, to anyone of any color no matter where you are from. Please think that we as humans, the greatest, have the most amazing opportunity in the entire world. Our generation with the elders, adults and youth on this planet – this generation now has the greatest opportunity of any generation.

We have opportunity to change our fundamental beliefs, and we can take the next step in our evolution from this consumption of greed, we have the opportunity to evolve and grow and prosper from that. This generation, this is what we are meant to do – to bring forth a new revolution in a new mindset to this world.

If we work together we can do it. Please everyone get involved, because we need you all out there.