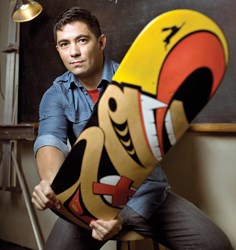 NextGen SWAIA Intensive Performing Arts Workshop is a weekend program for Native youth (ages 12–18) that explores art, traditional and contemporary music and dance, and spoken word. A series of interactive workshops will take place from November 15-17. Participating youth will perform in front of an audience on Sunday (Nov 17) afternoon and during SWAIA’s Winter Indian Market (Nov 30). This exclusive opportunity will provide eight Native youth a unique opportunity to work with and learn from renowned Native artists and performers Brian Frejo, Louie Gong, Ehren Kee Natay, and Michelle St. John. Applications are due October 4, 2013.

Brian Frejo (Pawnee/Seminole) is a cultural activist, motivational speaker, youth advocate, actor, musician, photographer and DJ. He is a member of the Grammy–nominated drum group Young Bird and plays the Native American flute. Additionally, Frejo has appeared in over twenty feature films and television series in his career.

Louie Gong (Nooksack) is an educator, artist, and activist. Gong is the founder of Eighth Generation, which combines elements of Salish icons and urban pop culture to create one-of-a-kind shoes that speak to questions and statements on identity and culture. Gong is known for his workshops around the world, his partnerships with the Smithsonian’s National Museum of the American Indian, and has been featured on NBC News, in the New York Times, and Native Peoples Magazine. Gong was also named in Native Max Magazine’s list of the “Top 10 Inspirational Natives: Past and Present.”

Ehren Kee Natay (Diné/Kewa) is a musician, dancer, actor, painter, and jeweler. Natay has toured the nation as a professional drummer and has been awarded various fellowships for his work as an artist, including the Wheelwright Museum of the American Indian Fellowship and the SWAIA/Heritage Hotels Rising Artists Fellowship. Natay designed t-shirts and merchandise for the 2013 Santa Fe Indian Market Artist Designed Collection.

Michelle St. John (Wampanoag) is a two-time Gemini Award winning actor with over 30 years of experience in film, theatre, voice, and music. Her film credits include Smoke Signals, Northern Exposure, and The Business of Fancy Dancing. For ten years she was the co-managing artistic director for the award winning play The Scrubbing Project and co-founded the Native women’s theatre company Turtle Gals Performance Ensemble based in Toronto. St. John is currently a producing partner for Frog Girl Films.

NextGen SWAIA Intensive Performing Arts Workshop is open to eight Native students at no cost; all food, lodging, and supplies are provided. Applications are available at this link. Deadline is October 4, 2013.