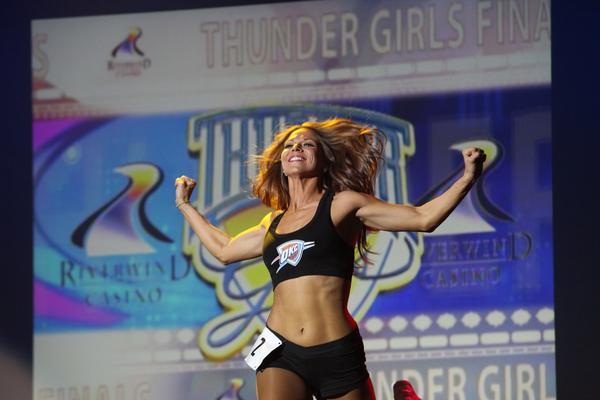 TheAdaNews.com
Katie Callaway, of Oklahoma City, during her audition for the NBA’s Oklahoma City Thunder Girls

A Chickasaw woman’s dream has come true. And she’ll get to share it with thousands.

Katie Callaway will cheer on basketball pros and fans as a member of the NBA’s Oklahoma City Thunder’s dance team.

“I am so excited,” Callaway said in a news release. “I can’t wait to get on those sidelines and entertain the best fans of any city with an NBA team.”

Callaway, 26, sat in the stands as a fan for six years before she decided to try out. But, she didn’t make the team on her first try.

“I worked hard, very hard, to improve my technique,” Callaway said reflecting on the failed effort. “I worked on leaps, turns, and pointed toes. It was a full-on effort for a year. It was tough.”
The final audition process consisted of three rounds: a choreographed routine, a question and answer session, and a solo dance. Only 38 women were selected as finalists from nearly 100 hopefuls. The group of 38 was eventually narrowed down to 20.

She auditioned at the Riverwind Casino in Norman, Oklahoma in front of a packed house. Now that she’s one of the 20 Thunder Girls, Callaway is looking forward to the team’s first game in November.

“I wondered what it would be like to be down there. I wondered how exciting it was for the team and how much they looked forward to it,” she said in the news release.

Callaway is an Oklahoma resident. She attended Ada High School where she was a cheerleader, but she was born in England where her father was stationed in the U.S. Air Force. Her mother is Chickasaw and works for the Chickasaw Nation. For years, her grandfather, Jack Wells, served as a Chickasaw tribal legislator and her great-grandmother, Delta Wells, was an original enrollee with the tribe.

“We’d go to festivals and I was a member of the Governor’s Honor Club,” Callaway said. “I learned my heritage is important and tradition is important. It is essential to know one’s self. I am very proud of my Chickasaw heritage.

But, Callaway won’t quit her day job. She’s a drilling engineer technician with Chesapeake Energy where she analyzes drilling for natural resources. She started working there as a receptionist and moved up rather quickly. Callaway is also a graduate of the University of Central Oklahoma in Edmond where she studied public relations.

Not only is she excited about cheering on the fans, but as a Thunder girl, Callaway will also have a chance to work with her community. “Being a part of the organization will give me that opportunity to give back, which is something I’m looking forward to very much.”