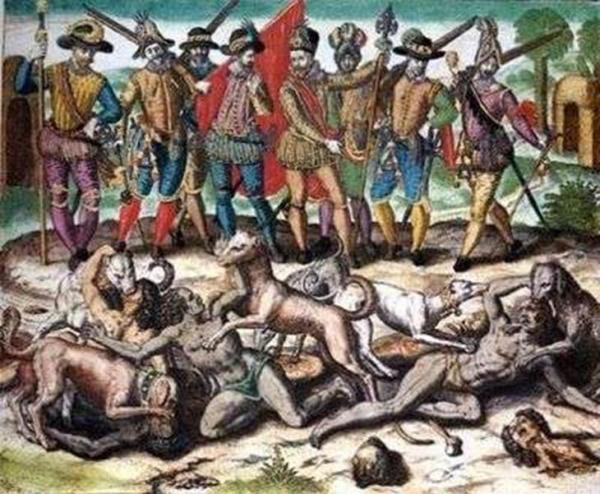 Columbus and his men hunted Natives with war-dogs.

On the second Monday of October each year, Native Americans cringe at the thought of honoring a man who committed atrocities against Indigenous Peoples.

Columbus Day was conceived by the Knights of Columbus, a Catholic Fraternal organization, in the 1930s because they wanted a Catholic hero. After President Franklin D. Roosevelt signed the day into law as a federal holiday in 1937, the rest has been history.

In an attempt to further thwart the celebration of this “holiday,” we at ICTMN have outlined eight misnomers and bloody, greedy, sexually perverse and horrendous atrocities committed by Columbus and his men.

On the Way—Columbus Stole a Sailor’s Reward

After obtaining funding for his explorations to reach Asia from the seizure and sale of properties from Spanish Jews and Muslims by order of King Ferdinand and Queen Isabella, Columbus headed out to explore a new world with money and ships.

Brimming with the excitement of discovering new land, Columbus offered a reward of 10,000 maravedis or about $540 (a sailor’s yearly salary) for the first person to discover such land. Though another sailor saw the land in October 1492, Columbus retracted the reward he had previously offered because he claimed he had seen a dim light in the west.

Replicas of the Niña, Pinta and Santa Maria in the North River, New York. They crossed from Spain to be present at the World’s Fair at Chicago. (Andrews, E. Benjamin. History of the United States, volume V. Charles Scribner’s Sons, New York. 1912/Wikimedia)

Columbus Never Landed on American Soil—Not in 1492, Not Ever

We’re not talking about the Leif Ericson Viking explorer story.  We mean Columbus didn’t land on the higher 48—ever. Columbus quite literally landed in what is now known as the Bahamas and later Hispaniola, present-day Haiti and the Dominican Republic.

Upon arrival, Columbus and his expedition of weapon laden Spaniards met the Arawaks, Tainos and Lucayans—all friendly, according to Columbus’ writings. Soon after arriving, Columbus wrecked the Santa Maria and the Arawaks worked for hours to save the crew and cargo.

Impressed with the friendliness of the native people, Columbus seized control of the land in the name of Spain. He also helped himself to some locals. In his journal he wrote:

“As soon as I arrived in the Indies, on the first Island which I found, I took some of the natives by force in order that they might learn and might give me information of whatever there is in these parts.”

The four voyages of Columbus are shown here. (Wikimedia Commons)

When Columbus first saw the Native Arawaks that came to greet him and his crew he spoke with a peaceful and admiring tone.

“They … brought us parrots and balls of cotton and spears and many other things… They willingly traded everything they owned…  They were well-built, with good bodies and handsome features…. They do not bear arms, and do not know them, for I showed them a sword, they took it by the edge and cut themselves out of ignorance. They have no iron. Their spears are made of cane… . They would make fine servants…. With fifty men we could subjugate them all and make them do whatever we want.”

After several months in the Caribbean, on January 13, 1493 two Natives were murdered during trading. Columbus, who had otherwise described the Natives as gentle people wrote “(they are) evil and I believe they are from the island of Caribe, and that they eat men.” He also described them as “savage cannibals, with dog-like noses that drink the blood of their victims.”

The cannibal story is taught as fact in some of today’s schools.

Columbus’ Men Were Rapists and Murderers

On Columbus’s first trip to the Caribbean, he later returned to Spain and left behind 39 men who went ahead and helped themselves to Native women. Upon his return the men were all dead.

This painting of Christopher Columbus was done in 1519 by Sebastiano del Piombo. (Wikimedia Commons)

With 1,200 more soldiers at his disposal, rape and pillaging became rampant as well as tolerated by Columbus.

This is supported by a reported close friend of Columbus, Michele de Cuneo who wrote the first disturbing account of a relation between himself and a Native female gift given to him by Columbus.

“While I was in the boat I captured a very beautiful Carib woman, whom the said Lord Admiral gave to me, and with whom, having taken her into my cabin, she being naked according to their custom, I conceived desire to take pleasure. I wanted to put my desire into execution but she did not want it and treated me with her finger nails in such a manner that I wished I had never begun. But seeing that (to tell you the end of it all), I took a rope and thrashed her well, for which she raised such unheard of screams that you would not have believed your ears. Finally we came to an agreement in such manner that I can tell you that she seemed to have been brought up in a school of harlots.”

Several accounts of cruelty and murder include Spaniards testing the sharpness of blades on Native people by cutting them in half, beheading them in contests and throwing Natives into vats of boiling soap. There are also accounts of suckling infants being lifted from their mother’s breasts by Spaniards, only to be dashed headfirst into large rocks.

Bartolome De Las Casas, a former slave owner who became Bishop of Chiapas, described these exploits. “Such inhumanities and barbarisms were committed in my sight as no age can parallel,” he wrote. “My eyes have seen these acts so foreign to human nature that now I tremble as I write.”

Because Columbus reported a plethora of Natives for slaves, rivers of gold and fertile pastures to Queen Isabella and King Ferdinand, Columbus was given 17 ships and more than 1,200 men on his next expedition. However, Columbus had to deliver. In the next few years, Columbus was desperate to fulfill those promises—hundreds of Native slaves died on their way back to Spain and gold was not as bountiful as expected.

Columbus forced the Natives to work in gold mines until exhaustion. Those who opposed were beheaded or had their ears cut off.

In the provinces of Cicao all persons over 14 had to supply at least a thimble of gold dust every three months and were given copper necklaces as proof of their compliance. Those who did not fulfill their obligation had their hands cut off, which were tied around their necks while they bled to death—some 10,000 died handless.

In two years’ time, approximately 250,000 Indians on Haiti were dead. Many deaths included mass suicides or intentional poisonings or mothers killing their babies to avoid persecution.

According to Columbus, in a few years before his death, “Gold is the most precious of all commodities; gold constitutes treasure, and he who possesses it has all he needs in the world, as also the means of rescuing souls from purgatory, and restoring them to the enjoyment of paradise.”

In addition to putting the Natives to work as slaves in his gold mines, Columbus also sold sex slaves to his men—some as young as 9. Columbus and his men also raided villages for sex and sport.

In the year 1500, Columbus wrote: “A hundred castellanoes are as easily obtained for a woman as for a farm, and it is very general and there are plenty of dealers who go about looking for girls; those from nine to ten are now in demand.”

In the early years of Columbus’ conquests there were butcher shops throughout the Caribbean where Indian bodies were sold as dog food. There was also a practice known as the montería infernal, the infernal chase, or manhunt, in which Indians were hunted by war-dogs.

These dogs—who also wore armor and had been fed human flesh, were a fierce match for the Indians. Live babies were also fed to these war dogs as sport, sometimes in front of horrified parents.

Columbus Returned to Spain in Shackles—But Was Pardoned

After a multitude of complaints against Columbus about his mismanagement of the island of Hispaniola, a royal commissioner arrested Columbus in 1500 and brought him back to Spain in chains.

Though he was stripped of his governor title, he was pardoned by King Ferdinand, who then subsidized a fourth voyage.

RELATED: Christopher Columbus, The Myths Behind the Man