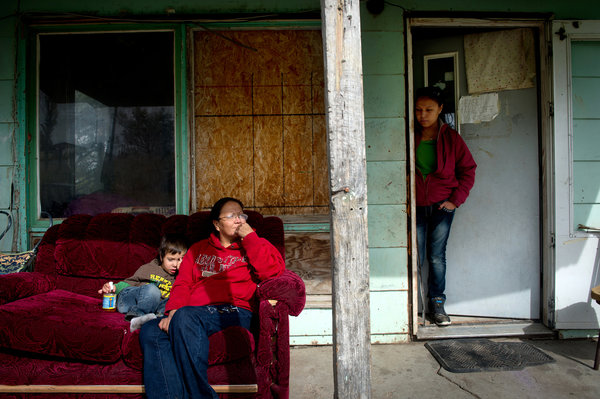 Rich Addicks for The New York Times
Audrey Costa at home on the Crow reservation in Montana with her grandson Benjamin Costa and her daughter, Beth Dawes, right. Ms. Costa has not received her federal lease payment.

CROW AGENCY, Mont. — Worlds away from Washington, Audrey Costa wondered aloud about keeping her family warm. A mother of three, she relies on lease payments from the Bureau of Indian Affairs on land owned by her family, which can run up to a few hundred dollars a year, to pay for food and electricity. But since the partial shutdown of the federal government began on Oct. 1, Ms. Costa, 41, has not received a check.

“We’re having such a hard time,” she said outside her tattered clapboard home in this poor prairie town deep in the heart of the Crow reservation. “I don’t know what I’ll do. Just tough it out, I guess.”

Like other largely impoverished Indian tribes that lean heavily on federal dollars, the Crow have been battered by the shutdown.

Some 364 Crow members, more than a third of the tribe’s work force, have been furloughed. A bus service, the only way some Crow are able to travel across their 2.3-million-acre reservation, has been shuttered. A home health care program for sick tribal members has been suspended.

Though the tribe has enough money to keep a skeleton government operating for now, it is running out.

“They don’t have a clue what’s going on out here,” the tribal chairman, Darrin Old Coyote, said of politicians in Washington from his office in Crow Agency, which sits in the shadows of the Little Bighorn battlefield, itself closed because of the shutdown. “It is hurting a lot of people.”

The Bureau of Indian Affairs, which provides a vast sweep of services for more than 1.7 million American Indians and Alaska Natives, has kept essential programs, like federal police and firefighting services, running. But it has stopped financing tribal governments and the patchwork of programs and grants that form the thin blanket of support for reservations racked by poverty and other ills.

“You’re already looking at a good number of tribes who are considered the poorest of our nation’s people,” said Jacqueline Pata, the executive director of the National Congress of American Indians. “When you are dealing with cutting off food supply programs and even nominal payments to tribal members, it creates a dangerous impact immediately.”

The Yurok tribe in Northern California, for example, relies almost solely on federal financing to operate. Its reservation, which spans parts of Humboldt and Del Norte Counties, already has an 80 percent unemployment rate, said Susan Masten, the tribal vice chairwoman. With money suddenly unavailable, the tribe has furloughed 60 of its 310 employees, closed its child-care center and halted emergency financial assistance for low-income and older members.

Financing for an environmental program that ensures clean drinking water on the reservation is running low. A second round of furloughs could affect tribal police officers, Ms. Masten said.

“The saddest thing about this is that the federal government has an obligation to the tribes,” she said. “In times like this, where it’s already extremely difficult, any further damage to our budget would be devastating.”

On the reservation of the Red Lake Band of Chippewa Indians in northern Minnesota, all nonemergency medical procedures have been placed on hold, said Dave Conner, a tribal official who helps manage the Red Lake’s government services.

The Red Lake were supposed to have received about $1 million from the Bureau of Indian Affairs this month to help operate their government, but the money was not released before the shutdown, Mr. Conner said.

The tribe has budgeted enough money to keep the most critical services running until the end of the month.

“This is a poor, rural, isolated reservation,” Mr. Conner said. “A lot of people rely on our services, so there’s a lot of fear right now.”

For some tribes, the pain of the shutdown has been sharpened by federal budget restrictions this year, known as sequestration, that imposed 5 percent cuts to the Bureau of Indian Affairs and the Indian Health Service.

Aaron Payment, the chairman of the Sault Tribe of Chippewa Indians in Michigan, said his tribe had already shut down its H.I.V. prevention program and furloughed employees for its Head Start program for a month because of sequestration.

Now, with nearly $1 million in federal money lost since the shutdown, the tribe is scrambling to shift casino revenue from other programs to keep its government afloat.

“We’re in turmoil right now,” Mr. Payment said. “The impact here is going to be felt by the people who need the services the most.”

Kevin Washburn, assistant secretary for Indian affairs, said the shutdown could have long-term effects on tribes and tribal members. Financial deals and economic programs have been suspended. Environmental reviews of tribal projects will be delayed. And the impact on the thousands of Bureau of Indian Affairs employees who have been furloughed is compounded because many support poor relatives, he said.

“The cushion that tribes might have had to help them get through tough times is gone because of sequestration,” Mr. Washburn said.

In Hardin, Mont., a gritty reservation border town, Presina Grant has been caring for her sister, who broke both of her wrists in a fall. Until recently, Ms. Grant, who is Crow, had been reimbursed $8 an hour as part of the tribe’s health care program.

But after the program was suspended because of the shutdown, Ms. Grant, 43, found herself in a long line of other tribal members applying for food stamps. Her daughter is a high school cross-country runner and craves nutrition. But with money tight, she often must feed her three children frozen food.

“Everyone was just sad — you could just feel it,” Ms. Grant said, recalling the day this month when she collected her final paycheck from the tribe. “People are worried. We’re praying every day.”