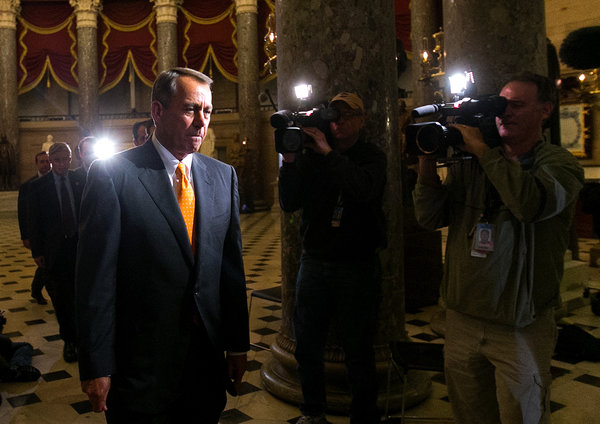 With the Treasury Department warning that it could run out of money to pay national obligations within a day, the Senate voted overwhelmingly on Wednesday evening, 81 to 18, to approve a proposal hammered out by the chamber’s Republican and Democratic leaders after the House on Tuesday was unable to move forward with any resolution. The House followed suit a few hours later, voting 285 to 144 to approve the Senate plan, which would fund the government through Jan. 15 and raise the debt limit through Feb. 7.

Most House Republicans opposed the bill, but 87 voted to support it. The breakdown showed that Republican leaders were willing to violate their informal rule against advancing bills that do not have majority Republican support in order to end the shutdown. All 198 Democrats voting supported the measure.

Mr. Obama, speaking shortly after the Senate vote, praised Congress, but he said he hoped the damaging standoff would not be repeated.

“We’ve got to get out of the habit of governing by crisis,” said Mr. Obama, who urged Congress to proceed not only with new budget negotiations, but with immigration changes and a farm bill as well. “We could get all these things done even this year, if everybody comes together in a spirit of, how are we going to move this country forward and put the last three weeks behind us?”

After the House vote, officials announced that the federal government would reopen on Thursday and that federal employees should return to work.

The result of the impasse that threatened the nation’s credit rating was a near total defeat for Republican conservatives, who had engineered the budget impasse as a way to strip the new health care law of funding even as registration for benefits opened Oct. 1 or, failing that, to win delays in putting the program into place.

The shutdown sent Republican poll ratings plunging, cost the government billions of dollars and damaged the nation’s international credibility. Mr. Obama refused to compromise, leaving Republican leaders to beg him to talk, and to fulminate when he refused. For all that, Republicans got a slight tightening of income verification rules for Americans accessing new health insurance exchanges created by the Affordable Care Act.

“We fought the good fight,” said Speaker John A. Boehner of Ohio, who has struggled to control the conservative faction in the House, in an interview with a Cincinnati radio station. “We just didn’t win.”

In a brief closed session with his Republican rank and file, Mr. Boehner told members to hold their heads high, go home, get some rest and think about how they could work better as a team.

Two weeks of relative cohesion broke down into near chaos on Tuesday when Republican leaders failed twice to unite their troops behind a last-gasp effort to prevent a default on their own terms. By Wednesday, House conservatives were accusing more moderate Republicans of undercutting their position. Representative Charlie Dent of Pennsylvania, a leading Republican voice for ending the fight, said Congress should have passed a bill to fund the government without policy strings attached weeks ago.

“That’s essentially what we’re doing now,” Mr. Dent said. “People can blame me all they want, but I was correct in my analysis and I’d say a lot of those folks were not correct in theirs.”

Under the agreement to reopen the government, the House and Senate are directed to hold talks and reach accord by Dec. 13 on a long-term blueprint for tax and spending policies over the next decade. Mr. Obama said consistently through the standoff that he was willing to have a wide-ranging budget negotiation once the government was reopened and the debt limit raised.

Mr. Boehner and his leadership team had long felt that they needed to allow their restive conference to pitch a battle over the president’s health care law, a fight that had been brewing almost since the law was passed in 2010. Now, they hope the fever has broken, and they can negotiate on issues where they think they have the upper hand, like spending cuts and changes to entitlement programs.

But there were no guarantees that Congress would not be at loggerheads again by mid-January, and there is deep skepticism in both parties that Representative Paul D. Ryan of Wisconsin and Senator Patty Murray of Washington, who will lead the budget negotiations, can bridge the chasm between them.

“This moves us into the next phase of the same debate,” said Senator Richard J. Durbin of Illinois, the second-ranking Democrat. “Our hope is now that Speaker Boehner and his caucus have played out their scenario with a tragic outcome, perhaps they’ll be willing to be more constructive.”

As Republican lawmakers left the closed meeting Wednesday, some were already thinking of the next fight.

“I’ll vote against it,” said Representative John C. Fleming, Republican of Louisiana, referring to the Senate plan. “But that will get us into Round 2. See, we’re going to start this all over again.”

Senator Mitch McConnell of Kentucky, the Republican leader who was instrumental in ending the crisis, stressed that under the deal he had negotiated with the majority leader, Senator Harry Reid of Nevada, the across-the-board budget cuts extracted in the 2011 fiscal showdown remained in place over the objections of some Democrats, a slim reed that not even he claimed as a significant victory.

The deal, Mr. McConnell said, “is far less than many of us hoped for, quite frankly, but it’s far better than what some had sought.”

“Now it’s time for Republicans to unite behind other crucial goals,” he added.

Chastened Senate Republicans said they hoped the outcome would be a learning experience for the lawmakers in the House and the Senate who shut down the government in hopes of gutting the health law, Mr. Obama’s signature domestic achievement. Instead of using the twin issues of government funding and borrowing authority to address the drivers of the federal deficit, conservatives focused on a law they could never undo as long as Mr. Obama is president, several lawmakers said.

“Goose egg, nothing, we got nothing,” said Representative Thomas H. Massie, Republican of Kentucky.

Senator Richard Burr of North Carolina took a swipe at his fellow Republican senators Ted Cruz of Texas and Mike Lee of Utah, as well as House members who linked government financing to defunding the health care law, which is financed by its own designated revenues and spending cuts.

“Let’s just say sometimes learning what can’t be accomplished is an important long-term thing,” Mr. Burr said, “and hopefully for some of the members they’ve learned it’s impossible to defund mandatory programs by shutting down the federal government.”

While Mr. Cruz conceded defeat, he did not express contrition.

“Unfortunately, the Washington establishment is failing to listen to the American people,” he said as he emerged from a meeting of Senate Republicans called to ratify the agreement.

For hundreds of thousands of federal workers across the country furloughed from their jobs, the legislative deal meant an abrupt end to their forced vacation as the government comes back to life beginning Thursday.

In a statement late Wednesday, Sylvia Mathews Burwell, the director of the Office of Management and Budget, made the reopening official.

“Employees should expect to return to work in the morning,” she said, adding they should check news reports and the Office of Personnel Management’s Web site for updates.

For Mr. Boehner, who had failed to unite his conference around a workable plan, Wednesday’s decision to take up the Senate bill proved surprisingly free of conflict. Hard-line Republican lawmakers largely rallied around the speaker.

Representative Raúl R. Labrador of Idaho, said he was “really proud” of how Mr. Boehner had handled the situation. “I’m more upset with my Republican conference, to be honest with you,” he said.