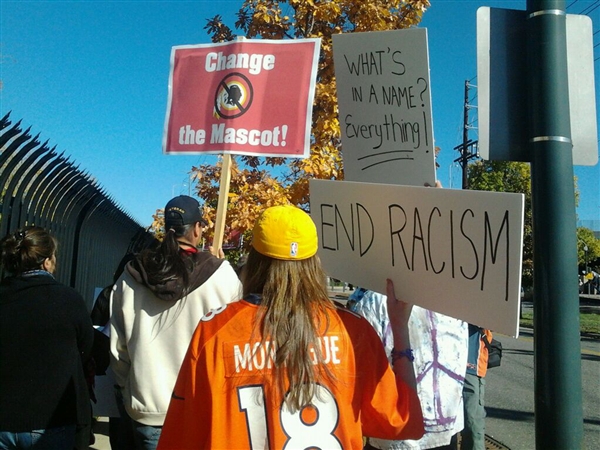 Courtesy Tessa McLean
Demonstrators march with signs toward Invesco Field in Denver, Colo., to protest the Washington Redskins name as the team arrived at the stadium, Oct. 27, 2013.

Hundreds of people rallied in Denver on Sunday to protest the name of the Washington Redskins and to send a message to team owner Dan Snyder that the nickname is derogatory to Native Americans.

Tessa McLean of the Ojibwe Nation and youth council leader of AIM Colorado, told NBC News that they marched to Sports Authority Field from nearby Auraria Campus and met the players and coaches with placards, drums and a bullhorn as the team pulled into the parking lot.

McLean added that Native Americans and their allies spent Saturday afternoon making signs for the demonstration, some reading “Change the Name” with others declaring, “What’s in a name? Everything!”

“(Redskins) is a term that was created for proof of Indian kill,” she said, referencing the early-American sale of Indian scalps.

Tink Tinker of the Osage Nation and a professor of American Indian Cultures and Religious Traditions at the University of Denver, told the crowd that the issue demonstrates a history of racism toward Native Americans.

“It’s always been about the hatred of Indian skin,” he said.

Basim Mahmood, whose ancestry stems from east India, told NBC News he was there to protest against discrimination.

“As a person of Indian origin, I stand in solidarity with them because we are all fighting the same thing — which is racism,” he said.

Radio ads, paid for by the Oneida Indian Nation in New York, have aired in cities where the Washington Redskins are scheduled to play. Prior to Sunday’s match-up between the two teams, Denver’s Sports Station KDSP-FM ran the latest ad. Reddog Rudy, a member of the American Indian Movement Colorado and of Ute and Chicano heritage, protests outside of Invesco Field in Denver, Colo., Sunday, October 27, 2013.

Oneida Nation has encouraged Americans to lobby the NFL in support of the name change at www.changethemascot.org, a website that debuted at the beginning of the 2013-14 football season.

The issue over the team name has even prompted comments from President Barack Obama who said that were he the owner of the team, he would consider changing the name.

“I’ve got to say, if I were the owner of the team and I knew that there was a name of my team, even if it had a storied history that was offending a sizable group of people, I’d think about changing it,” he said.

Washington D.C. Mayor Vincent Gray chimed into the debate earlier this year by stating that if the team wishes to relocate within the district’s borders from its base in Landover, Maryland, Snyder would need to consider changing the name.

On Oct. 9, Snyder released a statement saying that he “respects the opinion of those who disagree” with his position, but reiterated that he remains immovable on the subject, citing an acclaimed team history.

“We owe it to our fans and coaches and players, past and present, to preserve that heritage,” he wrote.

Numerous sports writers and publications including Mother Jones, Slate and the New Republic have recently announced that they have instituted policies against using the team name in their stories.

This week, officials of the NFL will meet with the Oneida Indian Nation in New York City to discuss the caustic subject of a name change, the Associated Press reports.

Debra Preston of the Omaha Nation, who was at Invesco Field protesting with her 8-year-old granddaughter, Lilliah Walker, told NBC News she was there in honor of Native American children and elders.

“We want Indian mascots to be deleted from mother earth,” she said. “This is our country, our nation, and we’re sick and tired of racist names being used against us.”

A group of Native Americans have sued the Washington Redskins arguing against the team’s trademark rights to the name. Trademarks that are deemed racist are illegal under U.S. federal law.