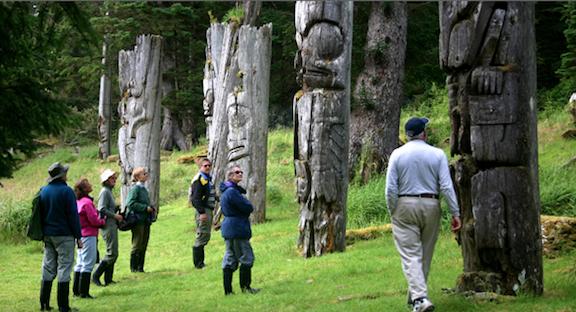 Just months ago, members of the Haida First Nation raised a carved totem pole in Gwaii, a protected area, for the first time in more than 130 years. The celebration marked the 20th anniversary of the agreement that the Haida people have with the Canadian government to protect their homeland.

Jason Aslop, from the Haida Heritage Centre, talked to BBC News about the importance of the raising legacy totem pole. “Raising a pole again in Gwaii signifies our resurgence and our resilience to repopulate and take back our culture and began to put place markers back into our traditional village sites.”

Like many of Canada’s First Nation people, from the 1870s to until the 1970s, Haida children were taken from their parents and sent to boarding schools, where their cultural practices and languages were banned.

Haida First Nation peoples surround the legacy totem pole before it was raised in August. (VancouverSun.com)

The Canadian government has apologized, but despite what happened in the past, today, the Haida culture is thriving. And tourism plays a big role in the Haida people’s success.

A report from First Nations in British Columbia says the tourism industry is one of the largest economic sectors in the province, worth copy3.5 billion. The government wants to grow tourism to copy8 billion by 2016 as part of its “Gaining the Edge” policy. This amounts to a 5 percent growth each year, according to the report.

Tourism continues to grow because 1 in 4 visitors come to the province seeking an authentic aboriginal tourism experience.

Tourists are drawn to Haida Gwaii Islands on the northwestern coast of British Columbia because it is famous for sea kayaking. A BBC News report says that most tourists rent kayaks for a week, which costs about $400 for two people. An 8-day guided kayaking tour costs around $2000 per person.

Many tourists visit the centuries-old cedar poles, and long house remains at the Haida heritage sites in the Gwaii Haanas National Park Reserve. The Haida Heritage Center in Skidegate allows tourists to learn about their culture.

Art is one of the main ways that tourists connect with the Haida people. An art route created throughout Gwaii Haanas allows visitors to meet local artists.

Ben Davidson, a Haida wood carver, is one of the artists that tourists can meet during their tour. “My generation and my children’s generation, really, are stepping up to the plate and relearning old traditions and wanting to be part of the culture as well as the art,” Davidson told BBC News.