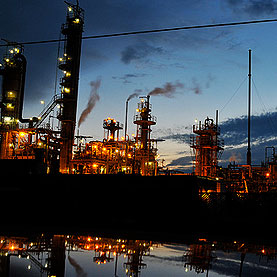 More than 50 industrial facilities are located near the homes of 850 people of the Aamjiwnaang First Nation close to the U.S.-Canadian border near Lake Huron. A study conducted between 1999 and 2003 showed an unusually low birth rate for baby boys among the tribe’s women.
Jonathan Lin/Flickr

Is exposure to estrogen-blocking chemicals in one of Canada’s most industrialized regions the reason so few baby boys are born to the Aamjiwnaang First Nation mothers who live near there?

An article by Brian Bienkowski that originally appeared in Environmental Health News and was picked up by Scientific American says a new study is the first to confirm the community’s concerns over elevated exposure to pollutants.

The findings do not prove that chemicals are causing fewer baby boys in the community, but they provide some limited evidence suggesting a possible link.
“While we’re far from a conclusive statement, the kinds of health problems they experience – neurodevelopment, skewed sex ratios – are the health effects we would expect from such chemicals and metals,” said Niladri Basu, lead author of the study and associate professor at McGill University in Montreal.

A 2005 report said baby boys account for only 35 percent of births in the tribe, compared with 51.2 percent nationwide. The reservation sits within 15 miles of a region known as “Chemical Valley,” which is home to more than 50 industrial facilities, including oil refineries and chemical manufacturers.

Forty-two pairs of Aamjiwnaang mothers and children were tested for the study. For four types of polychlorinated biphenyls (PCBs), the average levels found in the children ranged from 2 to 7 times higher than the average Canadian child. The mothers’ average levels were about double the Canadian average for three of the compounds.
PCBs were widely used industrial compounds until they were banned in the 1970s in the United States and Canada because they were building up in the environment.
Eating fish is the most common exposure route for PCBs. But a survey revealed the community eats very little fish, so the high levels of PCBs remain “a puzzle,” Basu said. He suspects the chemicals are still in the soil and air from decades ago.

Shanna Swan, professor and vice-chair for research and mentoring at the Icahn School of Medicine at Mount Sinai, noted that the study was small and it is important not to jump to conclusions. Swan surveyed the community to see if there was interest in following up on the original research, based on births between 1999 and 2003, and was told no.
“There’s no question there’s exposure, it’s clearly a polluted place,” Swan told Bienkowski. “But this is their ancestral home … what to they get out of you telling them how badly off they are?”