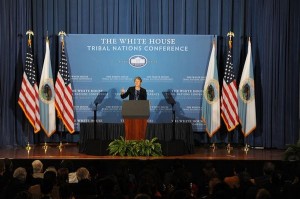 Building on the participation of tribes announced in President Barack Obama’s recent executive order laying out a plan to deal with climate change, the National Congress of American Indians (NCAI) announced that it too would partner with the administration.

Several federal officials noted the severe impacts that climate change has had on American Indians and Alaska Natives, the NCAI said in a release. During the conference, Secretary of the Interior Sally Jewell, Obama and others spoke directly to those issues in Indian country and about how the government can work with tribal leaders to best address these challenges.

Jewell set the tone for ongoing cooperation, the NCAI said in its statement, by speaking “of the ongoing dialogues we need to have as we work together toward tribal self-determination and self-governance and promoting prosperous and resilient tribal nations.”

“The health of tribal nations depends on the health of tribal lands. So it falls on all of us to protect the extraordinary beauty of those lands for future generations,” he said at the Tribal Nations Conference. “And already, many of your lands have felt the impacts of a changing climate, including more extreme flooding and droughts. That’s why, as part of the Climate Action Plan I announced this year, my administration is partnering with you to identify where your lands are vulnerable to climate change, how we can make them more resilient.”

Obama referred to tribes extensively in the seven-point plan, which he issued on November 1. Many tribes already have action plans in place, since they have been forced to deal early on with the ramifications of a rapidly changing environment.

RELATED: 8 Tribes That Are Way Ahead of the Climate-Adaptation Curve

The NCAI also noted tribal references from Secretary of Energy Ernest Moniz, who talked about the more than 30 Alaska Native villages “facing imminent threats from rising seas levels,” as well as the ways in which climate change has hindered hydroelectric and other energy projects. EPA Administrator Gina McCarthy asked tribal leaders to “help us explain why climate change must be addressed now and why it is our responsibility” to combat it for seventh generation and beyond, the NCAI said.

“It is critically important that tribal leaders are at the table because too often, Native voices are left out of federal conversations around mitigating the effects of climate change,” the NCAI said in its statement. “Indian country faces some of the most difficult challenges stemming from climate change because of the remote location of many tribal lands and, particularly in Alaska, the dependence on the land and animals for subsistence living. NCAI applauds the Administration for this effort and is hopeful that by working together, government-to-government, tribal communities will have the tools necessary to address climate change.”