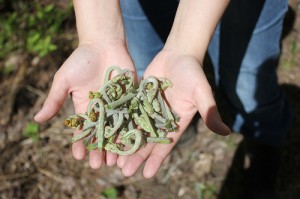 The curly tips of the fiddlehead fern can be found in early spring before they open to reveal a full taste akin to asparagus. U.S. Forest Service photo. –

Elizabeth Nelson tasted then added more spice to a soup made with fiddlehead ferns, those curly leaves of a young fern that resemble the scrolled neck of a superbly crafted violin.

Although Nelson has made the soup hundreds of times before, her culinary prowess this day is being documented for a project called Mino Wiisinidaa!, or Let’s Eat Good! – Traditional Foods for Healthy Living.

“When we were kids, my mom would send us all out with a bucket. And she said, ‘Don’t you kids come back until that bucket is filled,’ ” said Nelson, a member of the Bad River Band of the Lake Superior Tribe of Chippewa Indians Reservation in Northwest Wisconsin. “And we would go and fill them with cow slips and fiddlehead ferns. And that was our supper for the night. That was how we lived.”

Documenting Nelson’s kitchen expertise is part of a three-year Great Lakes Indian Fish & Wildlife Commission project, funded by the Administration for Native Americans. The project will encourage healthy living by reintroducing food preparation taught by elders of the Anishinaabe people and based on recipes that are decades old.

“The Mino Wiisinidaa! Let’s Eat Good! project focuses on a return to traditional Anishinaabe foods in a new and healthy way,” said LaTisha Coffin, project coordinator. “We work with many elders from our member tribes that want to pass on knowledge about our traditional foods and stories about harvesting and the healthy lifestyle that came with gathering and processing your own food.”

One of the main goals of the program is to combat diabetes, obesity, and other chronic diseases. Native Americans are at higher risk at developing pre-diabetes and diabetes, especially type 2 diabetes. Type 2 is the most common form of diabetes, and many people are unaware they are at high risk. According to the American Diabetes Association, Native Americans have the highest age adjusted rate for diabetes at 16.1 percent while the overall United States rate is half that.

To date, more than 70 recipes have been gathered that take advantage of plants that grow in the wild in and around and the Chequamegon-Nicolet National Forest. Many of the recipes are aimed at getting tribal members to rediscover traditional foods in a healthier way and talking about moderation and balancing meals, especially for diabetics. In order to test and try these recipes, the project staff harvests, or wildcrafts, with tribal elders. Wildcrafting is harvesting plants from their natural environment and serves as an economical way to find edible plants that can become healthy table fare.

“When we are out harvesting with a tribal elder, we make sure to listen and learn as much as we can from them. There are always certain ways to harvest foods, certain amounts you should take while leaving the rest to return for next year,” Coffin said. “The elders tell us how to care for natural resources that we gather and harvest, so that they will be around for us to harvest next year, and for our children to harvest, and their children to harvest.”

Foraging requires knowledge about plants. Some varieties of fiddlehead fern will make you sick, and are mostly used as a diuretic. Make sure to thoroughly research plants and their look-alikes before harvesting, or harvest with an expert.

The Northern Great Lakes Visitors Center on the Chequamegon-Nicolet has become the kitchen to test out such dishes as wild rice flour breads, watercress pesto, venison cabbage rolls, and a healthier version of Nelson’s fiddlehead fern soup.

Recently, during the forest’s annual fishing day event for kids, more than 100 people got to sample another project recipe: Mole Lake Lobster, which is actually white fish that is a traditional food in the Upper Great Lakes region. Event goers also got to take home the recipe for this traditional and microwavable dish.

The Mino Wiisinidaa! project will continue to host cooking demonstrations through next spring and will create and distribute a cookbook with an instructional DVD that includes all of the collected recipes, including Nelson’s soup.