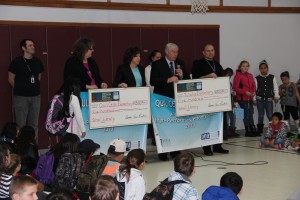 Tulalip − American Education Week began Monday, November 18th, with visits to Totem Middle School and Tulalip Quil Ceda Elementary school by the National Education Association (NEA) and Washington Education Association (WEA). Both campuses, earmarked as priority schools, exemplify a joint commitment of students and teachers to academic achievement. The incredible turn around embodies the intent of the School Improvement Grant (SIG grant) they received as schools in need. A change in national perspective led to the development of the grant which catalyzed the positive turn around at these schools.

“Because of previous legislation, schools that needed assistance were labeled failing,” said Kim Mead of the WEA, referring to No Child Left Behind, which decreased funding to schools that did not meet state and national standards. “We changed our perspective, failing schools came to be seen as priority schools.”

In the last five years, 97 Washington schools were considered failing and had their funding cut. With the new perspective of those schools as a priority, the US Department of Education created the SIG grant in 2010, providing three-year funding to schools on the national priority list. 28 schools were awarded grant funding of the 60 eligible schools in Washington state that applied.

The SIG grant is conditional funding, giving four plan options to bring schools up to standard. These options are closure and transfer students to high achieving schools, turnaround by reorganizing currents school curriculum and staff, transformation through a change in leadership and instruction, and restart which would convert public schools to charter schools, which were illegal in Washington state until 2012. Of the 28 Washington priority schools awarded grants, now specified as SIG schools, 1 school closed, 23 selected transformation, and 4 opted for the turnaround, including Totem, and Tulalip Quil Ceda.

Led by the teachers, these schools developed their staff and curriculum to change the professional practices in their schools. Through the SIG funding, Totem purchased laptops for each grade in order to assess individual understanding of course materials. They developed a home visit program so that teachers have the necessary skills to bring school needs into the home, while addressing home issues, not as a means lower standards or make accommodations, but to understand how to balance the school work with home life. The most prominent demonstration of home life coming to school is the morning assembly at Tulalip Quil Ceda, which incorporates traditional values into the school day. The NEA observed the assembly during their visit.

“I chose Washington to kick off American Education Week,” said Dennis Van Rockel, NEA president. “I hear so much about Washington, what you all are doing here, and I’m glad to be able to come and see it first hand.”

Programs in these SIG schools that see drastic positive improvement are leeching out into other schools throughout MarysvilleSchool District.

“This is important as we get ready to roll out the Common Core curriculum, which is the national standard equivalent,” said Tulalip Quil Ceda teacher, George Camper.

2013 marks the final year of the SIG grant funding, which means the priority schools were evaluated nationwide. Totem and Tulalip Quil Ceda not only outperformed all others in the state, they outperformed the nation’s priority schools. In recognition of their achievement, each of their libraries were given $500, and each school was given a banner acknowledging their accomplishment.

The nation is now looking to Washington as an example for the work Totem, and Tulalip Quil Ceda schools have done. They have set a standard for priority schools nationwide, which is described in a packet titled ‘Improving Student Achievement in High-Poverty Schools: Lessons from Washington State,’ that outlines how these schools successfully turned around from persistently low achieving to high achieving.