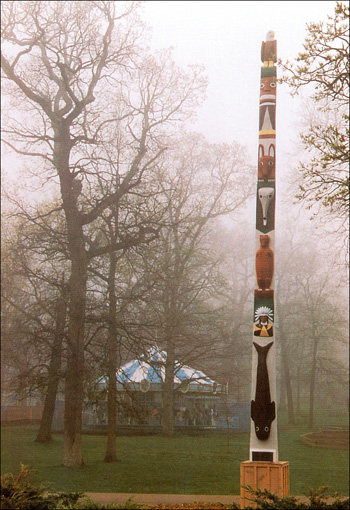 The 37-foot story pole was originally carved by Tulalip Tribe leader and artist William Shelton. It stood in a park in Illinois for more than 70 years until weather and bugs forced it to be taken down. Now the Burke Museum is working to bring it home. (Photo courtesy Freeport Park District)

SEATTLE – For more than 70 years a pole stood watch over a Boy Scout park in Freeport, Ill. This pole shared a story, carved in wood, of a Native American culture to those who visited the park until it was removed.

And, now the Burke Museum wants to bring this story pole – created by in the Northwest by Snohomish Tribe leader William Shelton — home.

“It’s an important pole for us because we don’t have a pole from that period,” said Robin Wright, with the Burke Museum. “William Shelton really initiated the totem pole carving for the Coast Salish.”

After being carved by Shelton, the 37-foot pole was sent to Illinois in 1935. There it stood in Krape Park until 2008 while weather and bugs led to its decay. The story pole was taken down five years ago and has remained in a warehouse ever since.

“The bottom of it where it went into the ground is completely rotten, and other portions of the pole need some loving care,” Wright said “It’s in pretty poor condition.”

Not sure what to do with the pole, the Freeport Park District contacted the Burke Museum to see if it might be interested in taking it. The museum is home to a large Northwest Coast collection and very familiar with works of Shelton and the Coast Salish culture.

However, getting the pole here is tricky and will cost thousands of dollars. To help offset some of those moving expenses, the museum turned online, to a crowd sourcing fundraiser in hopes of raising $7,500. The money will help pay for a truck and flatbed trailer to haul the pole across the country.

Shelton is recognized for carving a number of poles between 1910 and the 1930s, and this particular pole, Wright said, tells the same kind of story found on all his poles.

“The whale at the bottom and the eagle at the top” Wright said.  “Whales are very important for the original story of the Tulalip Tribe. It goes back to a time when people were starving and whales would help herd the salmon up the stream so people could get food.”

The Burke Museum plans to work with representatives from the Tulalip Tribe, as well as Shelton’s family, who happen to live in Snohomish County, to interpret the pole once it arrives. It’s unknown how much it will cost to actually restore the pole, and it will need to be fumigated. The hope is to hire Tulalip carvers trained in story pole restoration.

Shelton’s pole will be tallest pole in the museum’s collection and will be mounted inside.

More information about the museum’s fundraising efforts can be found online.