Pacific lamprey are the oldest known fish in the Columbia River System. Fossils indicate they were here 450 million years ago. 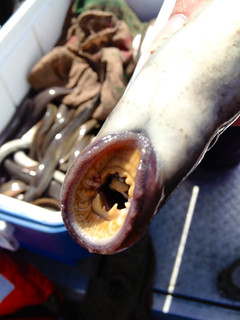 A Pacific lamprey, caught
at Willamette Falls in Oregon.

The toothy, eel-like fish are an important part of tribal diets and a good indicator of ecosystem health. But salmon and steelhead recoveries have overshadowed the decline of the lamprey, which some non-tribal fishers considered a “trash fish.”

To help raise awareness about the lamprey CRITFC, the U.S. Fish and Wildlife Service and Freshwaters Illustrated have released a documentary about efforts to recover the Pacific lamprey — before the fish are put on the endangered species list.

The documentary travels to all the Columbia River tribes to highlight different lamprey projects, from harvesting lamprey at Willamette Falls — which I can tell you is a wet, slippery, exciting job — to trucking the fish around dams.

Right now, CRITFC is holding screenings for the tribes. The East Oregonian reports about 35 people came to a showing in Pendleton, Ore. Organizers hope to screen the documentary around the Pacific Northwest in the future.