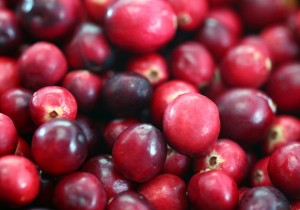 The Algonquin, Chippewa, and Cree, among others, gathered wild cranberries where they could find them in what is now Maine, Massachusetts, New Jersey, and Wisconsin, all the way west to Oregon and Washington, and north to areas of British Columbia and Quebec, according to Devon Mihesuah, a professor at the University of Kansas and an enrolled citizen of the Choctaw Nation. The berry was called sassamenesh (by the Algonquin) and ibimi (by the Wampanoag and Lenni-Lenape), which translates literally as “bitter” or “sour berries.” Cranberries were used for everything from cooking to dyes for textiles to medicines.

According to Mihesuah, who also runs the American Indian Health and Diet Project, the Native Americans ate cranberries as fresh fruit, dried the fruit and formed them into cakes to store, and made tea out of the leaves. The Inuktitut of eastern Canada used the cranberry leaves as a tobacco substitute. There were also a range of nonculinary uses for the berry, says Mihesuah. Cree boiled the fruit and used it to dye porcupine quills for clothing and jewelry. Chippewa used cranberries as bait to trap the snowshoe hare.

And harnessing the nutritional power of the fruit—cranberries are extremely high in antioxidants and are thought to help prevent heart disease—Iroquois and Chippewa used cranberries for an assortment of medicinal purposes: as “blood purifiers,” as a laxative, and for treating fever, stomach cramps, and a slew of childbirth-related injuries.

Read more about Native Americans and cranberries on National Geographic.