This morning a Sonic Drive-In Restaurant in Belton, Missouri displayed a street sign emblazoned with the following phrase: “KC CHIEFS” WILL SCALP THE REDSKINS FEED THEM WHISKEY SEND – 2 – RESERVATION. Within a few minutes of the sign being displayed, social media erupted against it and the restaurant’s phones were overloaded with complaints. 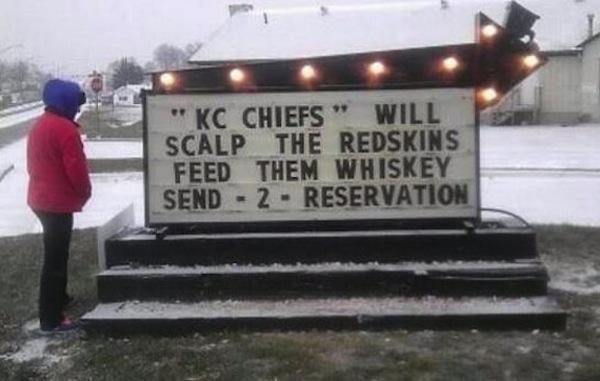 This sign appeared this morning outside a Sonic Drive-In Restaurant in Belton, Missouri
Cody Blackbird

According to Cody Blackbird, who manages theNative Citizen News Networkon Facebook and posted the picture to his page, the sign was ridiculous. “I saw the sign and was like, ‘what the hell?’ how can a fast food chain put something like this outside their doors?”

Blackbird said he called the restaurant and spoke to the owner, Robert Stone.

Blackbird said he was not allowed to speak to the press, but he did say the employees who were responsible for the sign were a minimum wage cook, and an employee that didn’t know any better and was sent home crying.

“I explained the importance of negative stereotypes to the guy,” Blackbird said. “He seems like he cared about the issue and the owner said, ‘We wouldn’t even have this problem if the damn name of the team wasn’t the Washington Redskins.’”

Patrick Lenow, the vice president of public relations for Sonic Corp. issued the following statement in regard to the sign:

An independent franchise owner allowed two sets of remarks to be posted on a message board outside his restaurant. The remarks were wrong, offensive and unacceptable. His passion for his hometown football team and a reputation for creative remarks on his message board resulted in a lapse in judgment and he regrets allowing the remarks to be posted. The owner has reinforced with his employees the boundaries of what is acceptable and unacceptable. On behalf of the franchise owner and our entire brand we apologize for the offensive remarks.