A charity which bought 24 sacred Native American masks at a controversial Paris auction is to return them to the Hopi and Apache tribes in the US.

Of the 24 masks, 21 will be given to the Hopi Nation in Arizona and three to the San Carlos Apache.

The auction of 70 similar artefacts in April caused an outcry.

The tribes had sought to block their sale and the US embassy had asked for the latest auction to be suspended. 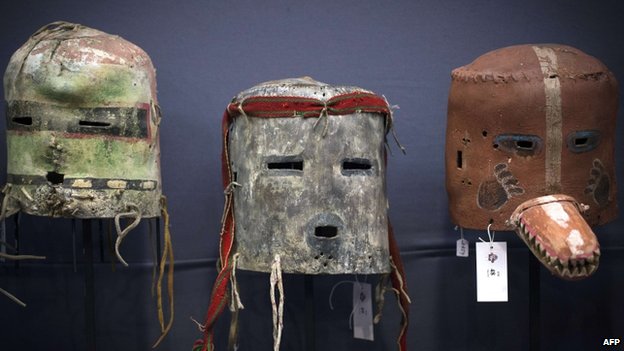 These Hopi masks were auctioned on Monday
The Tumas Crow Mother was another Hopi mask put on sale.

But French judges rejected legal challenges to both auctions, finding that the artefacts had been acquired legally.

The auctioneers argue that blocking such sales would have implications for the trade in indigenous art, and could potentially force French museums to hand back collections they had bought. 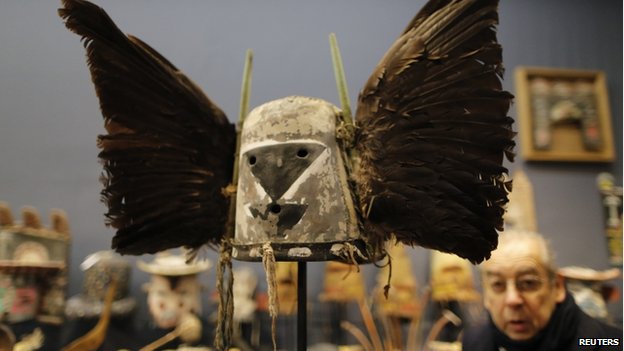 On Monday, the Hopi and Apache masks, together with other items, raised $1.6m, the Associated Press reports.

Pierre Servan-Schreiber, the Hopis’ French lawyer, bought one mask for 13,000 euros and also intended to return it to the tribe.

Responding to news of the Annenberg Foundation’s purchase, Sam Tenakhongva, a Hopi cultural leader, said: “This is a great day for not only the Hopi people but for the international community as a whole.

“The Annenberg Foundation set an example today of how to do the right thing. Our hope is that this act sets an example for others that items of significant cultural and religious value can only be properly cared for by those vested with the proper knowledge and responsibility. They simply cannot be put up for sale.”