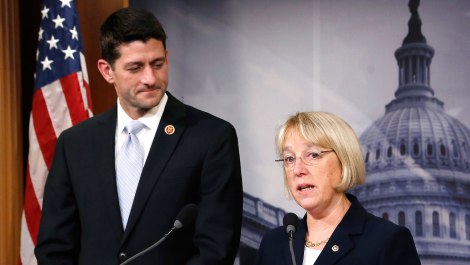 Congress can often seem hopelessly anti-environment, what with right-wing Republican extremism, the power of extractive industries in both parties, and the rural bias of the Senate. This week is a partial exception, so savor it.

On Tuesday night, House Budget Chair Paul Ryan (R-Wis.) and his Senate counterpart Patty Murray (D-Wash.) struck a deal to fund the government through Sept. 30, 2014, and reverse some of the painful spending cuts from sequestration. The Bipartisan Budget Act does not specify how much money would go to each government program, only that $63 billion that would have been cut from federal discretionary spending over the next two years will instead be replaced thanks to some increases in fees and some cuts from other areas such as federal employee pensions. About half of the spending will go to defense, and half to domestic agencies, including environmental programs. If it passes, it will be up to the House Appropriations Committee to determine exactly which program gets what.

Environmental organizations such as the Natural Resources Defense Council are issuing statements celebrating the good news. “This is a positive first step in undoing some of the damage to national parks, clean drinking water, air pollution monitoring, and other environmental priorities,” says Alex Taurel, deputy legislative director for the League of Conservation Voters.

The celebration could be premature, though. The bill may not even pass the Republican-controlled House of Representatives. Conservatives were objecting to the deal before it had even been made, and anti-government zealots on the far right, such as the Ron Paul–affiliated Campaign for Liberty, are coming out against it.

And if it does pass, environmentalists will still have to pressure congressional appropriators to restore funding to important environmental programs. The wish list is long. Sequestration cuts have made it more difficult for state and local governments to monitor and maintain air and water quality. The Clean Water State Revolving Fund, for example, is an EPA program that gives grants to states to lend money to localities that need to make capital improvements to their drinking-water or wastewater-treatment facilities. Sequestration cuts have meant that governments are putting off these essential investments. Scott Slesinger, legislative director at NRDC, says restoring those funds and making sure that the National Oceanic and Atmospheric Administration has adequate funding are top priorities. A blunt instrument such as sequestration can be very bad for NOAA because some years it needs to make a big expenditure, such as launching a new satellite, that will pay off over many years thereafter. But a hard, low cap on that year’s NOAA appropriation means it won’t have money for other programs.

Other environmental lobbyists point to clean air monitoring as an area where they hope to partially reverse sequestration. “A big area people ought to be concerned about is air pollution,” says Taurel. “A ton of money comes from the EPA and goes out to states to measure levels of smog in the air to tell people if it’s a code red day, or code orange day, and old people, kids, and people with respiratory problems need to stay in.”

Some environmental programs are likely to fare better than others. The EPA, for example, is a terrible bogeyman in the eyes of Republicans, so it may not see much additional funding. Interior Department programs, such as national parks, are less politically polarizing.

“You’ll have hopefully less closures at national parks in 2014 than you saw in 2013,” says Taurel. In addition to national parks and monuments being closed during the recent government shutdown, many were closed during portions of the year due to lack of funds. “One message from the government shutdown is that the public cares about public lands, especially national parks,” says Athan Manuel, director of the Sierra Club lands protection program. “So in theory you would see some of those cuts restored if Republicans are looking at public opinion.”

Why the conditional? Don’t all politicians care about public opinion? Well, many congressional Republicans do not. This is a caucus that rejected gun-control measures with 90 percent public approval in the wake of a massive school shooting. House Republicans are mostly just concerned with winning over the most radical elements of their base, in order to stave off primary challenges and then coast through the general election in their safely Republican districts. But there is not an anti–national parks lobby, much less one with the awesome power of the National Rifle Association, so there is cause for hope.

Some of the $63 billion is coming from oil and gas leasing. Of course, it would be better if no such drilling occurred at all, but it was going to happen anyway. The proposed budget deal would approve a treaty between Mexico and the U.S. to divvy up offshore drilling lease revenue from the GuIf of Mexico, which would add money to the treasury. Other components of the deal, such as limiting interest payments to oil and gas companies that overpaid on leases and eliminating federal assistance for deepwater oil exploration, are actually good, if minor, steps toward removing our enormous subsidies for fossil fuels. On the other hand, the deal does not eliminate tax subsidies for the oil industry, as President Obama has requested.

It is also worth putting the budget deal in its larger, lamentable, context. This is not so much progress as it is a partial reversal of a terrible regression. The sequestration cuts in the Budget Control Act of 2011 were supposed to be so draconian that it would force the two parties to reach a big bipartisan agreement to reduce long-term deficits. The whole premise was half-baked, since at a time of fitful economic growth, high unemployment, widening inequality, and record-low interest rates on federal government borrowing, our focus should be on stimulating growth through more deficit spending, not less. Stronger growth would also reduce budget deficits in the future through higher tax revenues and lower mandatory spending on poverty-relief programs such as food stamps.

Instead of pushing hard for stimulus, Democrats caved to Republicans’ economically illiterate anti-deficit hysteria. And then they found that Republicans were unwilling to make a deal that involved any additional tax revenue, thus dooming the efforts to find a grand bargain and locking in the sequester cuts. We also suffered through a government shutdown caused by Republicans’ irrational demands that President Obama and the Democratic majority in the Senate accede to their entire agenda, as if Mitt Romney had just won the election. Both the sequester and the shutdown adversely affected virtually every environmental program. This deal between Ryan and Murray is the outgrowth of those two catastrophes, and an effort to avoid their repetition.

“We passed the political hurdle where we’re finally starting to push back against the sequester, which is great from our perspective,” says Manuel. But the 2011 budget bill locked the sequestration levels in for 10 years, making them the new baseline from which future government funding levels are negotiated. Every effort to restore or increase funding is now a huge uphill climb. “The harm is still being done,” says Taurel, “because the sequester remains in place.”

Ben Adler covers climate change policy for Grist. When he isn’t contemplating the world’s end, he writes about cities, politics, architecture, and media. You can follow him on Twitter.