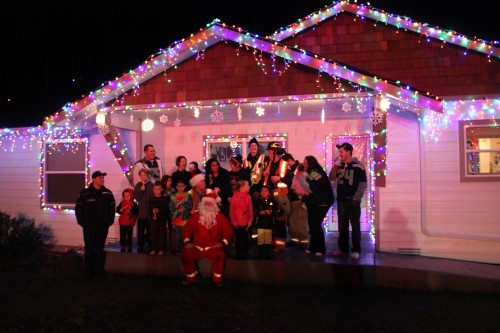 Tulalip Bay Fire Department brought a little Christmas cheer to the neighborhoods of Tulalip. A parade of the department’s two fire engines and ambulance had Santa riding along on an engine, jumping off to pass out hugs and candy canes to kids from one to ninety-two, all the while trumpeting horns and blasting sirens to let people know that Santa had come to town.

Kids and their families lined the streets on December 14th and 15th as Santa rolled through with his firefighting elves. The children’s faces lit up as soon as they saw him, or maybe that was from all the lights decorating the fire engines. A few times Santa and his elves joined families for a chorus of Rudolph the Red Nosed Reindeer. Passing neighborhood traffic didn’t seem to mind Santa parading down the street, many times passing cars stopped to join the holiday festivities.

The Holiday Santa run started at 5pm each day and lasted five hours, all the while collecting food and monetary donations for the Tulalip Food Bank. Santa and his elves filled the ambulance with donations over the course of the weekend.

There are many photos of Santa visiting children and their families. To view them please visit tulalipnews.com, or see our new facebook page; search Tulalip News.