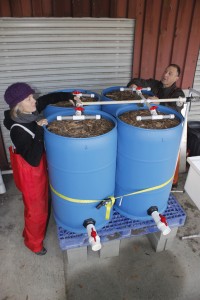 Rain gardens filter toxic chemical contaminants from stormwater before it flows into Puget Sound streams, but no one knows how well they protect the salmon that spawn in those streams.

That was this year’s question during the annual coho salmon stormwater experiment at the Suquamish Tribe’s Grovers Creek Hatchery.

Since 2011, tribal, federal and state scientists have been studying how salmon are affected by stormwater before they spawn.

In previous years, the research team found that adult coho were dying prematurely when they returned to spawn in urban watersheds throughout many areas of Puget Sound. Working with the tribe, the team hopes to better understand why stormwater runoff is so toxic, and also identify stormwater treatment methods that can effectively protect adult spawners.

At the hatchery this fall, scientists ran raw stormwater through four barrels of sand and compost. The barrels mimic the filtration that occurs when runoff is cleaned using various green stormwater infrastructure or low-impact development technologies. Unfiltered and filtered water were then placed into large tanks with fish to monitor their survival and observe their behavior. The team also exposed fish to clean well water from the hatchery.

“The Washington Department of Ecology recommends this kind of filtration technique for bioremediation and new low-impact development,” said Julann Spromberg, a NOAA toxicologist. ”We wanted to see how well it would work from the perspective of the fish – can we remove enough of the pollution from urban runoff to keep the coho spawners alive?”

Preliminary results show that this year was a success. Fish in the filtered water for 24 hours were alive and behaving normally, Spromberg said. In addition, the team conducted its regular experiment – exposing fish to hatchery well water and raw stormwater – and came up the expected results: the former survived, the latter did not.

“We don’t know exactly which contaminants are causing the fish to die, but we do know the bioretention filtration technique is effective,” Spromberg said.

The next step will be to take the filtered stormwater and the sand/compost mixture to try and determine what toxic components were filtered out, narrowing down what contaminants are causing salmon to die before they can spawn.

“I’m glad we’re able to provide a space for these folks to do this work,” said Mike Huff, Grovers Creek hatchery manager. “Anything we can do to support salmon survival benefits everyone.”