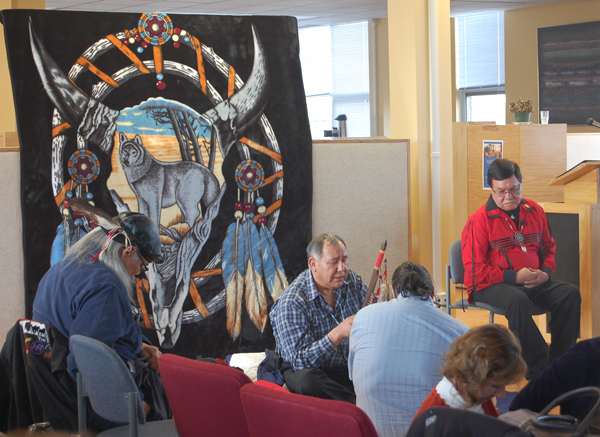 EDMONTON – Aboriginal Elders hold prominent, vital and respected roles in their communities — positions that are bestowed on a select few.
This is why a local Elder is concerned with an apparent trend he has seen taking shape in Edmonton.

Jerry Wood, an Elder in Residence, educator and cultural facilitator at Grant McEwan University, says he is commonly encountering people of non-Aboriginal descent passing themselves off as Elders.

“This confuses people,” said the 72-year-old Cree First Nations Elder, who also sits on the Council of Elders with the Edmonton Catholic School District.

“Native people don’t want to see others play around with their culture, it’s very spiritual, something they hold sacred.”

Wood described two recent occasions where people self-proclaimed themselves as Elders. He calls these people “plastic” or “popcorn” Elders.

“I saw this happen in a women’s jail,” he said. “A woman self-proclaimed that she was an Elder and told the ladies everything they wanted to hear.”

People passing themselves off as Elders do not realize the harm it creates in their communities, Wood says.

“The young ones who are vulnerable and unknowing believe in the myth of who these people are,” he said.

Wood believes that Elders should only be Métis, Inuit or First Nation.

Elders in Aboriginal societies are role models and share wise counsel. They provide advice and guidance about harmony and balance in a community. They are also considered the educators of heritage and language. Much like the differences in a doctor’s specialty, some Elders are teachers and some mentor youth or the community at large.

Others are Christian Elders, ceremonial Elders or they can take on the responsibilities while being a medicine man or woman.

But all Elders must be recognized by the community, Wood says.
“You just can’t be an Elder— it’s a process of becoming an Elder,” he said. “There is a process of learning, participation, ceremonies, such as sun dancing and fasting.”

Generally, Elders are older people in the community but sometimes youth can be “gifted” from the spirit world, Wood explains. Before being recognized as an Elder many people often act as “helpers” in the community.

Helpers, Wood says, are respected people who mentor under an Elder. All must also be alcohol and drug free.

But at the crux of the issue is that there is no Elder certification that proves people were “recognized by the community. You just can’t call yourself an Elder when you haven’t been given that right by the community,” he said.

“Even some Aboriginal people have not earned the title,” Wood said. “But there is a process… when people start calling you an Elder, seek your mentorship and you start sharing your knowledge in the community and you take on those responsibilities of Eldership, that is when you’re an Elder. You just can’t call yourself an Elder when you haven’t been given that right by the community.”