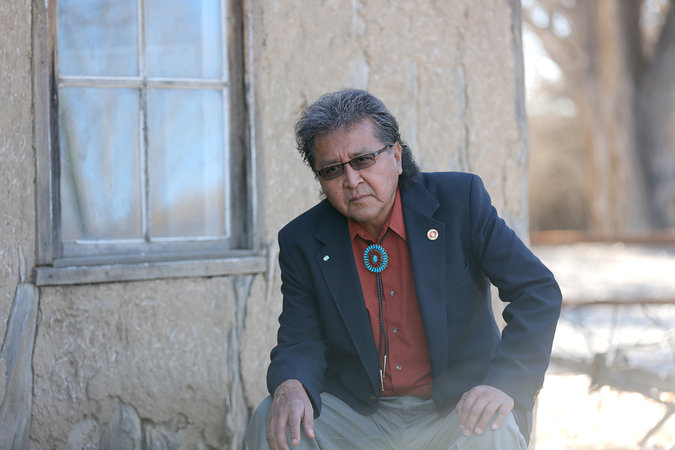 Launch media viewer
“A lot of people out here don’t even know that they have an allotment,” said Ervin Chavez, one of the settlement recipients. Paul McPherson for The New York Times

DENVER — Ervin Chavez remembers hearing talk around the Navajo reservation when he was young of money owed to American Indian families by the federal government for land debts.

Now 60, Mr. Chavez is one of the recipients of a $3.4 billion settlement that is being paid to Indians across the West, over royalties for land that was held in trust by the government and never reimbursed in full.

But as the payments are being made, more than 100 years after the trust program began, tens of thousands of Indians who are owed money cannot be located.

For months now, lawyers, specialized settlement administrators and volunteers like Mr. Chavez have fanned out across reservations, trying to track down those who are owed money.

“A lot of people out here don’t even know that they have an allotment,” said Mr. Chavez, who lives on the Navajo reservation’s edge in New Mexico. “It was something their grandparents or parents had always taken care of, and they had no idea they had ownership of land.”

About half a million Indians are eligible for payments, which vary in amount from hundreds to tens of thousands of dollars, depending on how much income their land generated. More than 30,000 tribal members have not yet been located. Some may have moved or died or are unaware they are eligible. The government has simply lost track of others.

All are owed at least $800, and in many cases, thousands more. The total owed to missing beneficiaries is approximately $32 million, according to Kilpatrick Townsend & Stockton, a law firm that worked on the settlement and is involved in locating tribal members.

David Smith, a lawyer with the firm, said the large number of missing beneficiaries illustrated how the Indian land trust program, administered by the Interior Department, was mishandled.

“Historically, there is no question that the government mismanaged these accounts and should have known where these people were,” Mr. Smith said.

“Individual Indians are sometimes some of the poorest people in this country,” he said. “The absence of that money has caused significant hardship.”

The dispute over the trust program dates to 1887, when Congress carved tribal lands, mostly across the West, into small plots, and assigned them to individual Indians. The land was leased for grazing, mining and other uses, and royalties were supposed to be paid into accounts set up for tribal members.

But a 1996 lawsuit filed against the Interior Department by Elouise Cobell, a Native American businesswoman from Montana, accused the government of mismanaging the royalties through poor accounting practices.

In 2009, the Cobell settlement, as it has become known, was reached, and it was eventually approved by Congress and President Obama.

Ken Salazar, the secretary of the interior at the time, hailed the settlement as a milestone for Indians, stating that it “honorably and responsibly turns the page on an unfortunate chapter in the department’s history.”

Since last year, when the first checks were distributed, 293,000 tribal members have received at least a portion of what they are owed. A second payment is expected to be made early this year.

The Interior Department initially identified 65,000 beneficiaries whose whereabouts were unknown, prompting a sweeping effort to find them.

Public service announcements have been broadcast on local television and radio stations, and reservation post offices peppered with notices. Dozens of public meetings have been held across tribal lands. Interior Department employees have set up information booths at powwows and other gatherings. Tribal governments have also been involved, poring over membership rolls.

So far, about half of the missing beneficiaries have been found, according to the Garden City Group, a firm appointed by a federal judge in the case to administer the settlement payments.

Many were surprisingly easy to locate, Mr. Smith said. Some were even federal employees or tribal officials.

But rural life on sprawling reservations has complicated outreach efforts.

The Garden City Group said one member of the Cheyenne and Arapaho Tribes of Oklahoma is owed about $121,000. A member of the Quechan Tribe at the Fort Yuma Reservation in California is due more than $81,000.

“These are folks who have not been able to be found by the government for a long, long time,” said Jennifer Keough, Garden City’s chief operating officer. “They live in very far-reaching places.”

Michele Singer, principal deputy of the Office of the Special Trustee for American Indians, part of the Interior Department, said her office was committed to reaching recipients of the settlement, and responded to an “overwhelming” number of requests for information.

For Mr. Chavez, the need to find those who are owed money is paramount.

“This is money that should be rightfully paid to the landowners,” he said. “It is something that has been going on for many, many years.”