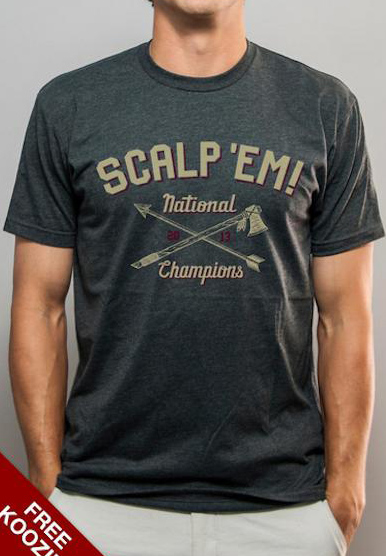 Among the bevy of fan merch, one specific T-shirt has FSU officials rushing to see that it is discontinued.

The T-shirt, marketed as a “Florida State University 2013 National Champs Vintage Tee,” and manufactured by RowdyGentlemen.com, has the words, ‘SCALP ‘EM!,’ emblazoned across the chest. Below the text is an arrow and tomahawk.

Liz Maryanski, vice president for university relations, told Indian Country Today that on January 10, FSU officials began measures for an “emergency cease and desist” of all sales of the offensive T-shirt.

“We would never license that shirt,” Maryanski said. “That term is extremely derogatory and it’s offensive.”

Maryanski said that during such infringement issues, FSU employs a third party company, Collegiate Licensing, to address the matter. The company will then contact the unlicensed vendor directly, she said.

Maryanski said that even if infringement were not an issue, FSU would work diligently to see that the T-shirt is eliminated.

“This is an infringement issue, but even it wasn’t, we would do everything in our power to shut it down,” she said.

Maryanski also said that FSU is “honored” to be able to use the Seminole name and is “very protective” of it.

Gary Bitner, spokesman for the Seminole Tribe of Florida, told Indian Country Today that the tribe is confident that FSU will make sure the shirt is discontinued.

“They (FSU) move quickly and effectively to do what needs to be done,” Bitner said, adding that the tee is a “terrible shirt.”

“It’s too bad that in 2014 we still see this kind of image and stereotypical presentation,” he said.

The Seminole Tribe’s Tribal Council authorized FSU to use its name and symbols and has an ongoing relationship with the university, Bitner said.

“The relationship between Florida State and the Seminole Tribe is one of mutual respect,” he said.

As of January 13, the T-shirt has not been taken down from the website and is still for sale.

Representatives of RowdyGentlemen.com did not respond to Indian Country Today’s request for comment.

An undefeated FSU beat Auburn 34-31 at the Rose Bowl in Pasadena, California, on January 6.