Oregon’s state treasurer says he won’t approve bonds for a new I-5 bridge across the Columbia River without a guarantee: that Oregon can collect tolls from Washington drivers. 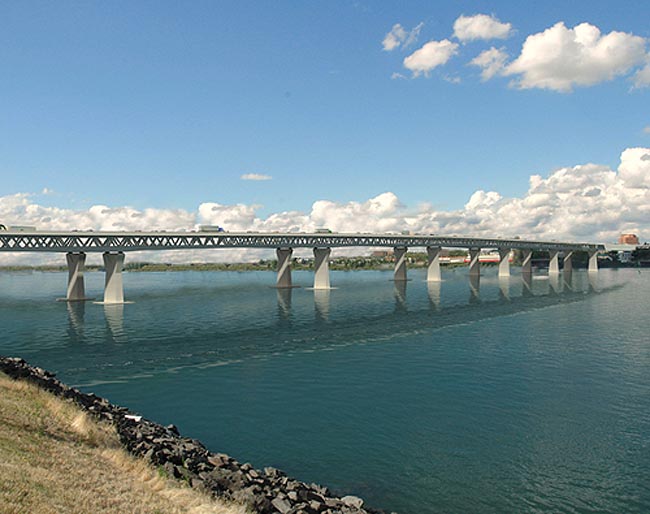 An artist’s rendition of the proposed 1-5 bridge over the Columbia River.
Columbia River Crossing
Source: nwNewsNetwork.org

The statement Friday is a response to a new analysis that says tolls will be enough to pay off the bonds for the project.

Oregon Treasurer Ted Wheeler says it’s not that he doubts enough drivers will use the proposed bridge, dubbed the Columbia River Crossing. It’s that he’s not sure enough of those drivers will actually pay the toll.

The new I-5 bridge would rely on electronic tolling. The money is either collected from a vehicle-mounted transponder or by scanning license plates and sending the driver a bill.

Here’s the thing: the majority of bridge commuters live in Washington. So the state of Oregon would need to work out an agreement with its cross-river neighbor to collect tolls from Washington drivers. Talks are under way between the states but no deal has been reached yet.

Wheeler says without such a deal, he’s not sure whether toll money would be enough to pay the debt on building the bridge.

Lawmakers in Olympia are wary of turning over control of tolling to Oregon. But Washington lawmakers have not approved any funding from their state to help build the bridge.