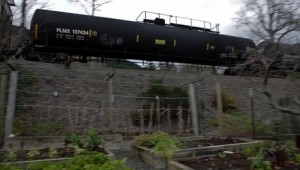 SEATTLE — Washington lawmakers took up a proposal Wednesday to require more transparency from companies that transport oil through the state.

The hearing on House Bill 2347 played out before a packed committee room in Olympia. The new bill would require oil companies to file weekly reports with the state Department of Ecology detailing how much oil is being transported, what kind of oil it is, how it’s being moved and what route it’s traveling through the state.

Right now oil companies aren’t required to share any specific information with state agencies about how much oil is traveling the railways.

Johan Hellman of BNSF Railway says it should stay that way. BNSF is the company currently delivering oil from the Bakken oil fields of North Dakota to Washington refineries. That traffic could increase as rail-to-ship transfer terminals are being proposed for ports on the Columbia River and Puget Sound.

“You can imagine if you’re publicizing information about specific routes, specific volumes, locations where those are being shipped it does provide a tremendous security concern,” he said in his testimony, adding that the oil companies don’t want to share that information for competitive purposes.

The U.S. Department of Transportation has classified Bakken oil as a hazardous material because it catches fire and explodes at much lower temperatures than previously thought.

Several city and county officials voiced support for the bill and concerns over the uptick in oil-by-rail traffic.

“I think we’re taking bombs through our cities when you look at Spokane,” said Ben Stuckart, president of the Spokane city council. “We’re in a situation where our town would be split in half if we look at a derailment.”

Oil trains currently run through Spokane before following the Columbia River. Once in Western Washington, they head north through the Interstate 5 corridor, passing through other towns and cities along their route.

More oil was spilled from trains in 2013 than in the last four decades combined. That’s according to an analysis of federal data by McClatchyDC.

The bill could be amended before passing out of committee. No Republicans have signed on to support the bill.