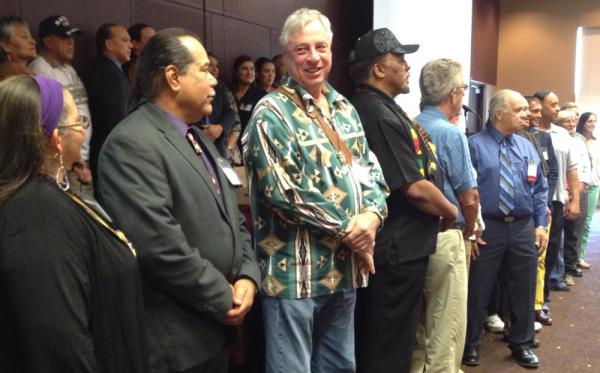 Gale Courey Toensing
Leaders and representatives of 29 indigenous nations that are not acknowledged by the federal government participated in a pipe ceremony and signing of a Declaration on the Exercise of Inherent Sovereignty and Cooperation on the first day of a conference called Who Decides You’re Real? Fixing the Federal Recognition Process at Arizona State University.

A unique direct action took place on the first morning of a recent conference on federal recognition: The panel discussions stopped for almost two hours while everyone participated in a ceremony for the signing and witnessing of a declaration asserting the inherent sovereignty of indigenous nations.

The conference, called “Who Decides You’re Real? Fixing the Federal Recognition Process,” was held January 16-17 at Arizona State University’s Sandra Day O’Connor College of Law. Close to 200 tribal leaders and representatives of both federally recognized and “unrecognized” indigenous nations, attorneys and consultants specializing in the Federal Acknowledgement Process (FAP), and federal officials attended. The discussion focused on the challenges faced by unrecognized tribes under what everyone agrees is a “broken” federal recognition process and ways to fix it.

The conference took place in the midst of a reform effort by Assistant Secretary – Indian Affairs Kevin Washburn and other Bureau of Indian Affairs officials that has been called “the most dramatic, bold proposal made in the federal acknowledgment area in probably the last 20 years.”

“This conference is timely to talk about what those proposed changes are and also to help those people who are struggling through the system,” said Frank Ettawageshik, former chairman of the Little Traverse Band of Odawa Indians and co-chair of the conference with Rev. John Norwood, tribal councilman and Principal Justice of the Tribal Supreme Court of the Nanticoke Lenni-Lenape Tribal Nation.

Ettawageshik and Norwood conducted the pipe ceremony that accompanied the signing of five original copies of the Declaration on the Exercise of Inherent Sovereignty and Cooperation by 29 tribal leaders. The leaders brought with them resolutions from their councils authorizing the signing. Everyone else present then signed five copies of witness sheets.

The key idea, Ettawageshik said, is that federal recognition is about two sovereigns negotiating diplomatic relations. “The relationship between the federal government and an indigenous nation isn’t a one-way street. We need to recognize each other,’ he said. “But I’ve often pointed out that if we as tribes in the U.S. define ourselves as having to have federal recognition in order to be a member of this group then what we’ve done is abdicated our role as a sovereign, we’ve abdicated the role of deciding with whom we will have diplomatic relations. In other words, are we indigenous nations going to recognize each other? We need to be thinking that through. And one of the ways we do that is by signing accords or agreements or treaties with each other, which is acknowledging each other.”

That was the concept behind the Declaration on the Exercise of Inherent Sovereignty and Cooperation, which was Ettawageshik’s brainchild during conference planning sessions with Norwood and co-chairs Patty Ferguson-Bohnee, a citizen of the Pointe-au-Chien Indian Tribe and director of the Indian Legal Program at the College of Law and attorney Judy Shapiro.

“Conferences generally present a series of panels or talking heads one after the other talking about ideas. That’s an important exchange but there’s something to be said for talking about something and then doing it. That helps cement the ideas and gets you moving in their direction.”

The Declaration is written in the style of the Declaration on the Rights of Indigenous Peoples and other international documents with a series of statements “honoring,” “building,” “expressing,” “desiring,” and so on, to the final statement, which says, “[W]e pledge, affirm and proclaim: To work with each other to exercise our inherent sovereignty as governments, to protect individual and common human rights, and to seek social justice. The dust and spirits of our ancestors that make up our cultural and national roots are deep in the waters and soil of this land, nurtured by the gifts of Mother Earth. As we stand on this land, we drink together from the waters of knowledge, we breathe the air of freedom and wisdom, and we bask in the light of cooperation and compassion. We assert these for our children’s children and beyond. We carry many lessons from our ancestors, and we share in the collective wisdom and experiences that they have entrusted to us to provide for our coming generations.”

Special engraved pens were given to everyone to sign the Declaration and embossed copies of the document were distributed. The five original copies will be preserved in different parts of the country.

“We wanted to make a memorable event that people could participate in and remember,” Ettawageshik said. From all accounts, the organizers succeeded.