Exhibition Opens at the Penn Museum in Philadelphia Saturday, March 1, 2014 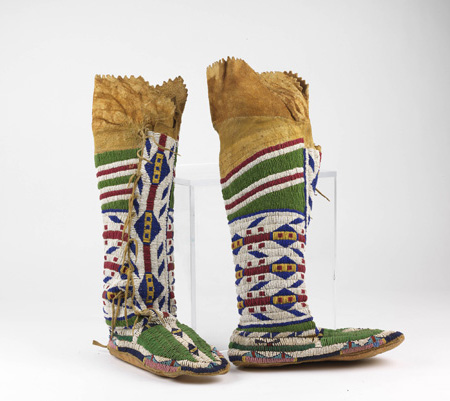 More than 250 Native American objects—ranging from 11,000-year-old Clovis projectile points to contemporary art—drawn from the Museum’s expansive collections from around the United States and Canada, help to tell the stories of Native American peoples today, their aspirations, histories, art, concerns, and continuing cultural traditions.

Material highlights include Lenape objects from the Delaware Valley region, war bonnets and regalia from the Plains and Prairie, intricately woven baskets from Maine and California, robes and regalia, moccasins, jewelry, children’s toys and clothing, contemporary Native American art, and world renowned stone tools from Clovis, New Mexico that are among the oldest objects in the Museum’s collection. Over the course of five years, nearly 300 objects representing more than 100 tribes will be rotated on display. At interactive digital stations visitors may investigate and sort these objects according to personal interests, fashioning their own unique experiences while gaining insight into the materials on display.

A Tapestry of Nations 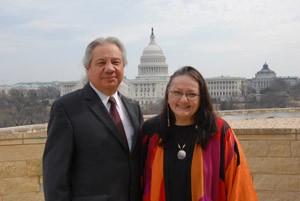 Far from having disappeared into the American “melting pot,” today’s Native Americans are culturally distinct and diverse. Today there are more than 565 federally recognized tribal entities in the United States alone (far more if one counts U.S. tribes that are not federally recognized, and Canadian First Nations).

Local Nations focuses on the histories and living communities of the Lenape people—the original peoples of Philadelphia and the Greater Delaware Valley region. The Lenape are known as the “grandfathers,” the peoples from whom all other Algonquian-speaking groups are descended. Escaping persecution in the 1800s, many, but not all, Lenape moved to Oklahoma, Wisconsin, and Canada where many are now federally recognized as sovereign Delaware nations. Several of today’s local Lenape who chose to stay in our region now hold state recognition in New Jersey, and some are seeking recognition at the federal level. Ancient artifacts from this region as well as more recent and contemporary Lenape objects and regalia are part of this theme.

The roles and meanings of Sacred Places are explored as a second exhibition theme. Natural landmarks are important to Native peoples, and ongoing issues around access to those sacred places, are explored. Places are important to Native Americans for many reasons; these are places where their ancestors once lived, where special events may have occurred in their histories, and others hold special resources needed today to continue traditions and strengthen Native American identities. Objects often hold related stories and histories such as family crest objects from Alaska; Southwest pottery made of clay dug from mother earth; and clothing, moccasins, and beadwork that hold associations and imagery of the land. Projectile points excavated in the 1930s at Blackwater Draw, New Mexico by Penn archaeologists John L. Cotter and E. B. Howard revealed evidence of an early “Clovis Culture” that flourished more than 11,000 years ago—some of the first solid evidence that Native Americans have inhabited North America for many thousands of years.

A third section of the exhibition explores Continuing Celebrations—the many ways in which contemporary Native American communities come together to mark and sustain their cultural identities. These range from familiar powwows (more than 1,000 powwows are held each year in the U.S. alone), to newer events such as Celebration, a biennial event in Juneau, Alaska that brings together Tlingit, Haida and Tsimshian families to celebrate the survival of their cultures. Today’s celebrations often include dance regalia and clothing, oratory, art, traditional foods, language workshops and more. Many Penn Museum objects come from traditions of celebration, and today’s Native artists continue to draw inspiration from objects made by their ancestors and elders. Examples include regalia such as shirts, headdresses, and leggings, as well as paintings, feasting dishes, and crest objects.

A fourth theme of New Initiatives explores ongoing economic, health, and educational initiatives in the Native American community. Native American activism has changed governmental policies and continues to create opportunities to raise economic and health standards in new ways. Highlights include the role of casinos, the development of cultural centers and language programs, the tourist market for native arts, new initiatives in the Academy, the return to traditional Native American foods, and repatriation legislation. Many objects in the Penn Museum’s collections speak to these issues: jewelry, basketry, and textiles created at different times and places for the tourist industry, and objects associated with continued health and well-being.

Native American Voices: The People—Here and Now is an exhibition more than five years in the making. In 2003, Dr. Lucy Fowler Williams, exhibition curator and Senior Keeper of the Penn Museum’s American Section, with Keeper William Wierzbowski and then-Curator Dr. Robert Preucel, invited more than 70 established and emerging Native American artists, leaders, and scholars from around the country to tell about the ongoing importance of objects in the Penn Museum’s North American collections which contain more than 150,000 objects representing tribes and nations from across North America. The result was Objects of Everlasting Esteem: Native American Voices on Identity, Art and Culture (2005), a hardbound book featuring Penn Museum objects paired with essays, poems, and commentary by 78 living Native Americans.

“We know the objects in Penn Museum’s collection are extraordinary as documents of different communities, times, and places in history—but we also wanted our collection to speak to the ongoing concerns and changing traditions of the people whose ancestors made them and first imbued them with meaning,” notes Dr. Williams.

More than 80 Native American consultants and collaborators have contributed to the exhibition. Four Native American advisors provided key assistance in refining the themes and stories that bring Native American Voices to life: Tina Pierce Fragoso, Assistant Director of Equity and Excellence, Coordinator of Native American Recruitment, University of Pennsylvania (Nanticoke Lenni-Lenape); Suzan Harjo, Executive Director, The Morning Star Institute (Cheyenne and Hodulgee Muscogee); master weaver and artist Teri Rofkar (Tlingit); and journalist and videographer Patty Talahongva (Hopi). In 2010 Ms. Talahongva worked with Dr. Williams to record video documentary interviews with 20 Native American specialists in the Southwest, Alaska, New Jersey, and Washington, D.C., portions of which appear in the exhibition. Many of the consultants have also worked closely with American Section staff members William Wierzbowski, Keeper of the American Collections, and Stacey Espenlaub, NAGPRA Coordinator, on a variety of issues pertaining to the collections and exhibition. Several Penn students have also assisted in the development of the exhibition.

Penn Museum’s Exhibition Department, led by Kate Quinn, Director of Exhibitions, developed and designed the exhibition. Multimedia interactives were developed with the Penn Museum team and designed by BlueCadet, with casework fabricated by Universal Services Associates.

Native American Voices: The People—Here and Now opens in the Museum’s Ruth and Earl Scott Gallery, adjacent to the Kamin Main Entrance. The exhibition has been made possible with lead support from Adolf A. and Geraldine S. Paier, Ph.D., and Frances and John R. Rockwell; additional support has been provided by The Annenberg Foundation/Gregory Annenberg Weingarten, the Coby Foundation, Joanne H. and William L. Conrad, Delaware Investments/Macquairie Group Foundation, and A. Bruce and Margaret R. Mainwaring. The Lead Education sponsor is PECO.

The Penn Museum (the University of Pennsylvania Museum of Archaeology and Anthropology) is dedicated to the study and understanding of human history and diversity. Founded in 1887, the Museum has sent more than 300 archaeological and anthropological expeditions to all the inhabited continents of the world. With an active exhibition schedule and educational programming for children and adults, the Museum offers the public an opportunity to share in the ongoing discovery of humankind’s collective heritage.

The Penn Museum is located at 3260 South Street, Philadelphia, PA 19104 (on Penn’s campus, across from Franklin Field). Public transportation to the Museum is available via SEPTA’s Regional Rail Line at University City Station; the Market-Frankford Subway Line at 34th Street Station; trolley routes 11, 13, 34, and 36; and bus routes 21, 30, 40, and 42. Museum hours are Tuesday through Sunday, 10:00 am to 5:00 pm, and first Wednesdays of each month until 8:00 pm, with P.M. @ PENN MUSEUM evening programs offered. Closed Mondays and holidays. Admission donation is $15 for adults; $13 for senior citizens (65 and above); free for U.S. Military; $10 for children and full-time students with ID; free to Members, PennCard holders, and children 5 and younger.

Hot and cold meals and light refreshments are offered to visitors with or without Museum admission in The Pepper Mill Café; the Museum Shop and Pyramid Shop for Children offer a wide selection of gifts, books, games, clothing and jewelry. Penn Museum can be found on the web at www.penn.museum. For general information call 215.898.4000. For group tour information call 215.746.8183

Photos, top to bottom: Arapaho Woman’s Moccasins, ca. 1890. Though Native people across North America wore moccasins, the beadwork design of these is distinct to the Plains region (image courtesy of Penn Museum Archives #240765); members of the Nanticoke Lenni-Lenape Tribal Nation, an active community from southern New Jersey where they hold state recognition (image courtesy of Lucy Fowler-Williams); John Echohawk, at left, is a Pawnee lawyer and founder of the Native American Rights Fund, which works to defend the rights of Native peoples nationwide. Suzan Harjo (Cheyenne and Hodulgee Muscogee), at right, is President of The Morning Star Institute, a Native American rights organization. They share perspectives on their work in the exhibition (image courtesy of Lucy Fowler-Williams).