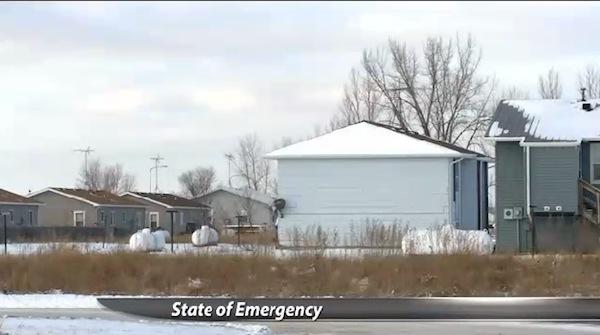 The Standing Rock Sioux have declared a state of emergency over a lack of propane gas for heating during the coldest of winter weather.

A national shortage has made supplies scarce and increased prices, making it difficult to procure propane and nearly impossible to afford, NBC News affiliate KFYR-TV reported on January 30. On the Standing Rock Sioux Reservation, up to 90 percent of residents rely on propane for heating. Many are being displaced by the cold weather because they can’t afford propane that has in some cases doubled in price per gallon.

“They’re already on a fixed income, so they have to make a choice. Do we need heat or do we need food?” Tribal Chairman Dave Archambault told KFYR.

Tribal members are reluctant to lean on already strapped and overcrowded family members, so the tribe has set up shelters in Wakpala, South Dakota and Fort Yates, North Dakota. that some are staying in. The American Red Cross has been on hand as well, supplying emergency meals to the shelters, while its Black Hills Area Chapter has provided cots and blankets, the agency said in a statement.

As recently as a month ago, Archambault told KFYR-TV, $500 would have bought enough propane for more than a month of heating. But in current frigid temperatures that’s only lasting two or three weeks, he said.

States across the Midwest are dealing with the propane shortage, Reuters reported on January 24. It is compounded by its reliance on trucking for transport, as well as by the diversion of some supplies to normally temperate southern states such as Alabama, Georgia and Tennessee, Reuters said.

Some relief is in sight, as the U.S. Department of Health and Human Services on January 30 released $439 million for the Low Income Home Energy Assistance Program nationwide, $3.4 million of which goes to North Dakota. American Indian tribes are slotted to get $817,000 of that, the Associated Press reported.  This comes on top of the initial funding of $2.9 billion nationwide allocated in November, the AP said.

Political representatives praised the release of new funds, which came on the heels of appeals to President Barack Obama for more funds from the governors of Iowa and Wisconsin. In North Dakota there was bipartisan support for the move as U.S. Senators John Hoeven, R-N.D. and Heidi Heitkamp, D-N.D., issued statements praising the release of funds.

“Our Native American brothers and sisters, as well as families all across North Dakota, are feeling the pain of two sharp swords—a particularly brutal winter and sky-high propane prices,” Heitkamp said.